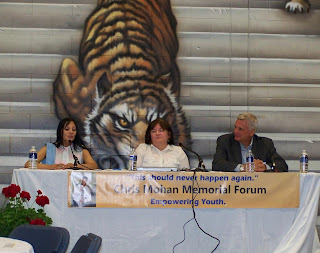 Today, Eileen Mohan in conjunction with Acting Together’s CURA Project put on a gang awareness forum at Queen Elizabeth Secondary in Surrey. Eileen was at the rally in Bear Creek Park where they released doves in memory of lost loved ones after her son was murdered. About six months ago I saw a dove outside my home and did a double take. What on earth is a dove doing in Surrey I thought. Then I wondered if it was one of the doves they set free a few years ago.

Eileen also put on a memorial mass for her son on his first birthday after the shooting. After that she helped out with a memorial golf tournament in conjunction with the Schellenberg famliy. Now she’s turning her focus directly on gang awareness forums which are desperately need in our communities for both parents and youth. With support from the City and corporate sponsors like CIBC and TD, this looks like a wonderful annual tradition. Dianne Watts was present at the beginning of the forum and helped kick it off showing the city’s endorsement and support of the event. Bruce Ralston was present as always.

Today’s panel consisted of Tom McCluskie from the Integrated Gang Task, Kim Bolan from the Vancouver Sun and Eileen Mohan herself, Surrey’s very own Mother Teresa. In fact some of Eileen’s comments about cherishing our children and finding time to love them reminded me of something Mother Teresa would say. As we know, Mother Teresa was an advocate for the poor. Yet when speaking to the wealthy West she talked about a different kind of poverty in North America. Not the want of bread but the want of validation, encouragement, of love. 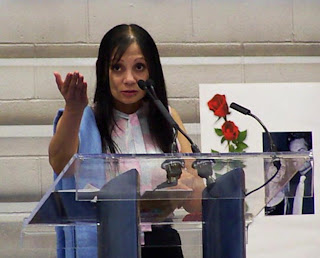 Eileen said she hears parents complain about their children and have a whole list of criticisms about them. It makes her sad. She then asks the parent what does your child do that’s good? Surely there must be something. We need to focus on our children’s strengths. 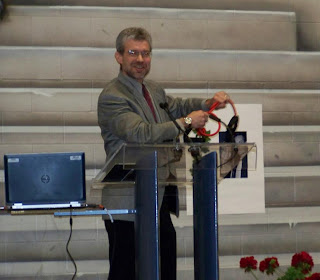 Dr Farhad Dastur, the Dean of Arts at Kwantlen did a wonderful job as the forum’s moderator. 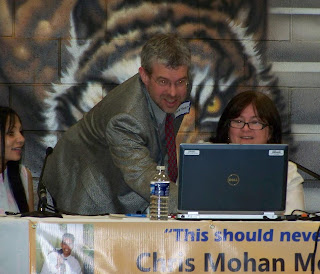 Kim Bolan gave a stirring power point about how gang life really isn’t that glamorous and illustrated how much betrayal there is in that game. Bal Buttar once worker for Bindy Johal and had him killed. In turn Bal Buttar was killed by people who at one time worked for him. It’s a dog eat dog world fueled by greed. 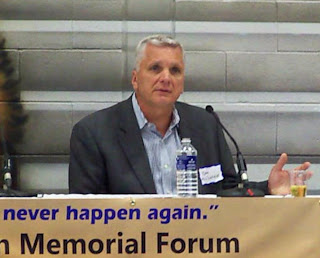 Tom McCluskie spoke about some of the work and some of the challenges the Gang Task force does and faces in the Province. Here's his talk on Youtube. One parent asked an important question. If we suspect a kid is involved with gangs, where do we call? Who do we report that to?

Tom explained that the task forced used to use CrimeStoppers but now has it’s own numbers people can call that are posted on their web site. That is important information. The parent then asked if those new numbers and web sites are advertized in posters for parents and youth to see. Not yet was the response. Another good idea. I'm having a hard time finding the contact number on the web site but when I do, I will post it accordingly. They do have a contact form on the site.

A sincere youth from Mexico and living in Surrey for the past two years shared an experience he had with one of his friends who got involved with the gangs and was seriously beaten by them. He talked about his concern and fear for his friend and asked what educational support there is out there to help youth understand that gangs aren’t very glamorous. The response was, not much but they are working on it. Abbotsford has started doing some as has Prince George. This Memorial forum is exactly that.