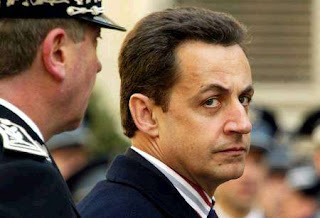 Three cheers. Sarkozy was not reelected in France. That guy was a dirty dog. He was accused of accepting campaign contributions from Gaddafi then screwed him royally and led the invasion which ultimately assassinated him without a trial. When confronted with the facts, Sarkozy publically denied accepting campaign contributions from Gaddafi, but when you look at the facts, I think Sarkozy is lying.

Gaddafi’s family claimed the campaign contributions came when Sarkozy was actively trying to convince the world to trust Libya with nuclear weapons and power because he wanted to sell them a French reactor. Sarkozy was publically lobbying on Gaddafi’s behalf. Then all of a sudden, things changed. What was Gaddafi’s sin that rationalized his execution? It couldn’t have been for a transgression that happened before Sarkozy was lobbying on his behalf, it had to of happened after.

Gadaffi being a “dictator” didn’t bother Sarkozy as long as he was contributing to his political campaign and promising to buy a French reactor. Did Gaddafi end up deciding on buying a reactor from someone else? Was that the real transgression that caused Sarkozy to lead the invasion against him under the guise of a Canadian poster puppet?

When the news broke that Sarkozy lost a democratic election in France, the media branded his opponent as a socialist. Maybe the candidate is left wing. How far left I have no idea. I do however support the freedom of association within a democratic society and I do think Sarkozy is a dirty dog.

However, it doesn't seem to be over for the dirty dog. Outgoing French President Nicolas Sarkozy, who has enjoyed legal immunity for the past five years, could soon be forced to explain himself to magistrates in three separate funding scandals that have dogged his time in power.

France’s constitution says a president cannot be required to testify or be investigated or prosecuted until a month after leaving office, a privilege that will end in mid-June for Sarkozy, who hands over to election winner Francois Hollande on May 15.

That frees the way for Sarkozy to be summoned for questioning by judicial investigators looking into murky affairs including a 1990s submarine sale to Pakistan and relations between Sarkozy, his party and France’s wealthiest woman.