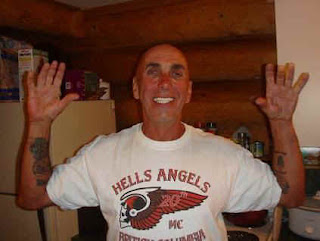 We all know about the 2009 Vancouver gang war which peaked a few years after the Surrey Six murder. Now let’s take a look and the recent outbreak of Vancouver gang violence. It started in 2011 and has started to heat up again recently. The most famous of which was the murder of the despised Jonathon Bacon in Kelowna. After that, there has been a series of exterminations.

Not likely in retaliation because it is very unlikely the Dhure or Dhak group had anything to do with the Kelowna hit. It appears that one small group of drug dealers that don’t work for the Hells Angels are being exterminated. Unlike with the Independent Soldiers or the Red Scorpions, they aren’t trying to take over this group, they are wiping them off the face of the earth simply to maintain exclusive control over the Vancouver drug trade.

Nicholas Lucier May 1 1012 arrested in Mexico

It all reminds me of the infamous words of Eric Sandburg to Agent 22 from a Hells Angels puppet club in Winnipeg called the Zig Zag crew when he was visiting Vancouver. Eric Sandburg told the Hells Angels associate that he could get him any gun he wanted and that they were ready to wipe out all the competition in Surrey. Indeed they were. Not only is the Hells Angels violent control of the drug trade concerning, but so is the deranged level of violence that goes along with it.