Pickton invited a sex trade worker to a biker party 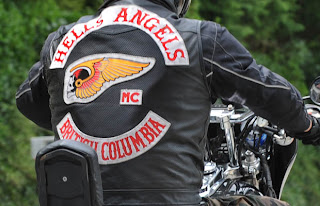 A former sex worker testified at the Pickton inquiry last Thursday. She said sometime in the fall of 2000, she was working the street in Vancouver's Mount Pleasant neighbourhood, several kilometres south of the notorious Downtown Eastside. A grey cube van approached her and she got inside, where she encountered a man who propositioned her to come to a biker party at his farm in Port Coquitlam, B.C., the woman testified. She told the inquiry she declined the offer because she had heard a warning at the Downtown Eastside Women's Centre not to get into a vehicle with a man offering to bring women to Port Coquitlam.

A "biker party." That's interesting. Sure isn't surprising since we know the Hells Angels frequented parties at Piggy's Palace in colours. In fact the inquiry was told the Hells angels had a grow op on site and ran an illegal booze can there. My understanding is that there was only one illegal booze can on site and that would have been Piggy's Palace. The non-profit society registered in Dave and Willy Pickton's name. That's the one the inquiry was told was run by the Hells Angels. That would explain why Willy referred to it as a bikers party.

Yet we know the Hells Angels weren't the only people who attended those parties. Lots of other people did. I'm told it was an after hours club for when roosters closed down. We were told that the inquiry will hear evidence that off duty police officers also attended parties at Piggy's Palace. Last Tuesday the inquiry heard a civilian RCMP worker saw Robert Pickton at a New Years Eve party on his farm with a woman she later recognized as one of the missing sex workers from Vancouver's Downtown Eastside.

The inquiry is hearing the police had many tips about the farm before they finally got a search warrant. One could argue that the credibility of the witnesses were in question which made getting a search warrant difficult. Let's hope that's the only reason for the delay. Yet one would think a tip from a civilian RCMP worker would have been credible enough to get a warrant. We're still waiting to hear testimony about off duty police officers attending parties there. We're also still waiting for the public inquiry to become public.