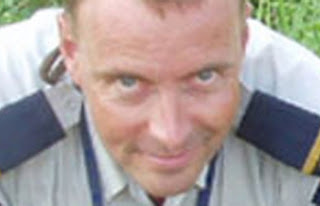 Why us? Everyone is talking about the disgraced Alberta RCMP officer who is being transferred to BC. There is another similar case breaking as we speak but first I will address Staff Sergeant Don Ray. Here we have another nut bar who somehow rises within the RCMP ranks to a management position. He was the officer in charge of the polygraph unit at Alberta's RCMP headquarters in Edmonton. Which kind explains how he can be RCMP and from Edmonton when Edmonton has it's own police force.

In that management position he was hosting after-hours parties in his office and kept a bar fridge stocked with Budweiser and Appleton Jamaica Rum. Well there's the problem right there- Budweiser. He's drink a fruit of the Loom label. Perhaps he just had that on hand for the ladies. I think they would have preferred Smirnoff Twist. The investigation found Ray would encourage female subordinates to drink and make sexual advances when alone with them.

In 2006, Ray offered beer to a public servant employed by the RCMP who was a subordinate in rank/position to him, but not under his command. Over drinks, the pair engaged in conversation that led to sex in the polygraph suite. Ray had a sexual relationship with the woman for approximately a year. During this time, he used the polygraph suite for drinking booze and having sex with the woman during lunch breaks and after business hours. He also used an unmarked RCMP vehicle assigned to him to travel to places where sexual relations occurred with the woman.

In April 2009, close to the end of one work day, Sgt. Ray invited his staff to a private office party at which he invited them to sit down and have a drink. One of his female subordinates consumed four beers over two hours, and once the others left, Sgt. Ray unzipped his pants, exposed himself and told her to touch his penis, according to RCMP files. She refused.

"S/Sgt. Ray then wanted to have sexual intercourse with Ms. A, which she refused. S/ Sgt. Ray insisted but Ms. A. maintained her refusal. They then both left the building without further sexual contact," a senior disciplinary officer wrote in his findings in February. The investigation said Sgt. Ray exhibited a "serial" pattern of "disgraceful" conduct.

A serial pattern of disgraceful conduct. This wasn't just one offence. The guy gets a 10 day suspension, demoted one rank and a transfer to BC. That is insane. Any other industry he would be fired. RCMP leaders defending their decision not to fire a him for disgraceful conduct makes then legally liable for it. The police hold a position of trust. That's what makes his ridiculous conduct all the more serious than in other industries. Kash Heed is trying to cash in on the exposure once again and I'm just going to set Kash Heed aside and address the issue. Kash Heed and his political party have enough of their own scandals to deal with. Banning the media from reporting on the location of outbreaks of agriculture-related disease like the bird flu is but one example. We'll let Kah Heed address that before he addresses anything about the RCMP.

The last thing we need is another fruit loop in BC managing the RCMP. We need to remember that these allegations from Krista Carle, a former RCMP constable, who spoke out about sexual harassment on the job came after Catherine Galliford, a former spokeswoman for B.C. RCMP, told the media she suffered sexual harassment from senior officers for years. Catherine Galliford was the RCMP spokesperson during the Pickton arrest. At that time she testified to a ridiculously unprofessional practice of ongoing sexual harassment during that investigation.

Which certainly opens pandora's box with regards to allegations from sex trade workers that during the Pickton case police officers blackmailed them into having sex with them. If they didn't have sex with the police officers, the police officers would arrest them for prostitution. I kid you not. I will remind you that this isn't just testimony from two former RCMP members who experienced ongoing sexual harassment at the work place. This is a class action law suit from many witnesses which clearly establishes a long standing tradition of tolerance of illegal sexual harrassment within the RCMP management for years.

These shocking revelations show a pattern unprofessionalism. Any other industry and these guys would be fired. The cover ups are not acceptable. Keeping an unlawful secret is unlawful. It makes one an accessory to the crime. Just like when IHIT literally screwed up by allowing and covering up for an RCMP investigator in the Surrey Six murder to have an affair on his wife by sleeping with a witness in that case. That was absurd.

The key thing here is that this absurd conduct isn't just unprofessional. It's illegal. That's why there is a class action law suit. Any other industry will tell you the employer has a legal duty to protect employees from sexual harassment. They are legally liable to do so. If they have shown to be negligent in tolerating sexual harassment, they become legally liable and subject to court awards of damages. That is why the police have lawyered up so much at the Pickton inquiry. If they were found negligent in obtaining a search warrant for the Pickton farm, the families of the victims including their children could feasibly be awarded court settlements. That is what everyone wants to avoid and is the reason for the absurd cover up with heavily censored documents. I'm not saying I want the police to be sued over their handling of the Pickton case. Most of us just want the truth. If there was corruption involved, then address it. Keeping an unlawful secret is unlawful. The only way inappropriate conduct is corrected is if it is confronted.