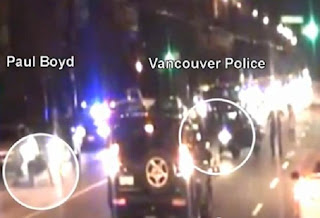 This is another sad story. In more ways than one. Everyone is talking about this new video released a tourist took of the VPD shooting a suspect named Paul Boyd. I watched the raw footage a few times and just couldn't see anything. The enhanced footage is clear. The suspect was on his hands a knees crawling towards the police as they shot him several times, once fatally in the head.

Tragedy doesn’t begin to describe the heart wrenching sorrow this video has uncovered. Paul's sister was quoted in the Vancouver Sun as saying: “All everyone has heard is that the police responded to a call of a man swinging a bike chain, this is TOTALLY untrue. That is not what they were initially responding to.”

Then it finally dawned on me. This is the case everyone is talking about? This is the bike chain shooting? Even if that story was true I personally found it bizarre. A guy went into the street swinging a bike chain and the police shot him dead. That was not the use of reasonable force. What’s worse is that story is not true. He was on his hands a knees crawling towards the police.

Two inherit tragedies surface. First, he should not have been killed. Second. The police lied. We’ve talked about in the initial scenario why can’t the police shoot a suspect in the leg? Why do they always have to put one in their chest? That’s the way they are trained. Well maybe it’s time to change the training. Shooting an unarmed suspect in the head or chest is not acceptable. As many have suggested it is murder.

The lying to cover it up is also a huge concern. It’s happened before. The Vancouver Province ran an editorial about the problematic nature of police lying. It is reminiscent of the lie that the British police told when they shot a suspect dead in London which triggered riots. The police claimed the suspect was armed and fired at the police. They even went so far as to claim the suspect hit one of the officers in the chest. They claimed the bullet hit the officer’s police radio which saved his life. That’s when they shot the suspect dead.

Only after the ballistics report came in that was simply untrue. The suspects gun, if it really was his, hadn’t been fired and the police radio was hit by a police issued firearm. They lied. The suspect hadn’t fired upon them. They lied and manufactured a bizarre story which was proven to be untrue. None of those officers were ever charged with murder or for perjury and being an accessory to murder.

Here we have a similar situation where the police are caught lying. As the editorial points out, it’s not the first time. So yes, lying to cover up the use of deadly force is a serious issue. Yet the use of deadly force in the wrong instances is the primary concern. If they didn’t make that error in the first place, they wouldn’t have to lie to cover it up. Jim Chu has promised a swift response. Let’s hope. Let's also hope that the police training retrains the police to get over this bizarre ego of over reacting when a suspect doesn’t obey their command at the snap of their finger. This isn’t the army. Civilians are civilians. Police are paid by tax dollars to serve and protect them.