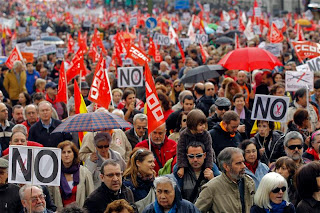 A lot of madness going on this May Day across the globe. I would like to clarify that although I have a special place in my heart for Quebec, I am concerned about the nature and scope of the University Tuition protests in Montreal. Everyone would rather spend tax dollars on schools and hospitals instead of on investment fraud, wars and prisons. Yet tuition in Montreal is the lowest in the country. Planning protests at night can’t be blamed on government infiltrators who cause violence to discredit the cause. A political protest shouldn’t look like a Vancouver Cannucks riot. We in Vancouver are ashamed of and furious with the senseless looters in the Stanley cup riot. Likewise, I understand the majority of Quebecers support Charest in the tuition dispute.

Again, I do think the concerns about tuition have merit and should be discussed. I just don’t support the use of vandalism to jump that cause before other important causes in the queue. I don’t see Australia as a Communist country. Yet their university education is paid for. Other countries in Europe, the same thing. I don’t think that is a goal within immediate reach for Canada but I think it is important to acknowledge and is a worthy goal to aspire to. Education is good.

The Greek protests are especially concerning. The Greek financial crisis was the result of investment fraud. What was once public money became private money and then disappeared. We are seeing the same thing happen here with BC Hydro. We are told Madoffs in Greece were springing up like popcorn without a lid. Goldman Sachs was involved in that fraud. That makes former executives from Goldman Sachs serving in the US government very concerning.

The Occupy movement returns. The Occupy movement has many valid concerns. Yet we need to support the democratic process. The Canadian bank bailout has finally made the news. Harpers spin doctors are still denying it happened. That kind of nonsense is very disturbing.

The Harper government was found in contempt for hiding details of the budget from parliament. They wanted to and in fact did, pass a budget without revealing the costs. That was unprecedented. Every step of the way more expenses are appearing and the Harper government is denying and rationalizing every single huge addition to their wish list. The costs of the fighter jet fleet is but one example. The more we dig the more we find out it costs. One military official said they were the wrong type of jets to defend the Canadian arctic. That’s because they aren’t for defending Canada. They are for invasive corporate oil wars.

Now when the bank bailout news breaks, they deny it and say it is a conspiracy theory to fuel leftists in the occupy movement. Well I’m sorry Mr. Harper but real conservatives are concerned about pork barrel politics and fiscal dishonesty. That was the era of Brian Mulroney that we broke off from. That is the era Mr. Harper merged with to get elected.

We wanted an Albertan in Ottawa. Unfortunately, Mr. Harper doesn’t share Albertan values. Alberta is a prosperous province. They don’t have sales tax. That stimulates business. Harper does the opposite by introducing the HST which taxes things that were previously tax exempt. That was unAlbertan.

Since Alberta is prospering, they now pay the premiums for their residents’ medical insurance. That is a wonderful idea. That isn’t socialism. It’s building a better society that we can be proud of. I am really concerned with Stephen Harpers obsession with propaganda and his defiant abandonment of Reform principles of polling the electorate. The robocall scandal is yet another example of this bizarre obsession.

In steps Conrad Black. Why not pour gasoline of the fire of insanity. Conrad Black was recommended to the Order of Canada by none other than Brian Mulroney. That shyster stole $30 million from Canadian taxpayers by committing perjury. He was tied to Iran contra through Trans World Arms and a host of other scandals. That kind of insanity is madness indeed. It’s maddening, but it is also infuriating. Taxation without representation and warrantless surveillance is what wars are fought over.

And then there was Seattle. A friend at work today asked me if I was in Seattle last night. I smiled and said why was their agro. He said they were rioting. It looked as ridiculous as the Stanley Cup riot. I shook my head and said no, I don’t support that. I believe in free speech and lawful assembly but looting and vandalism is not only senseless, it’s counter productive. It destroys the original cause completely.

Likewise, I understand there were some local skirmished in Vancouver last night. Lighting a fire in the middle of Commercial drive was stupid. The drive is a hub for nice restaurants and cafes as well as being artsy. It’s where the Italians go to celebrate or mourn Italy’s standing in the World Cup. No doubt the extreme right would be more than willing to pay provocateurs to cause trouble.

Nevertheless, I do think some trouble makers are there on their own accord. General Strike. People have been calling for a general strike since the Woodwards squat just because. There are a lot of valid concerns and some really important issues on the table. This is too important to let it slip away by a few idiots who want to cause trouble just because they enjoy the mob mentality.

In contrast, Rage Against the Machine guitarist Tom Morello lead the Occupy march in New York on May Day supporting his guitar army. Now that is inspiring. 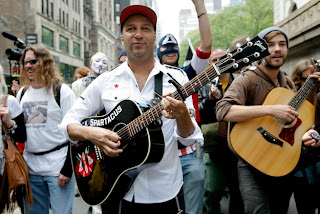