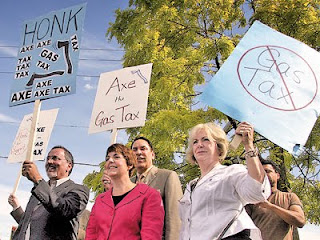 Speaking of the outrageous price of gas, it's even higher in Metro Vancouver to help pay for Skytrain. Wouldn't it be cheaper to install turnstiles? The Surrey Leader is reporting Metro Vancouver drivers are now paying more than $1 billion a year in combined gas and carbon taxes, according to the Canadian Taxpayers Federation.

The lobby group said the latest two-cent-per-litre increase in TransLink's fuel tax on April 1 and the next 1.1-cent bump in B.C.'s carbon tax on July 1 puts the region over that threshold. Drivers in Metro Vancouver now pay nearly 50 cents per litre in combined fuel taxes.

"This is highway robbery," said Jordan Bateman, the CTF's B.C. director. "Drivers are tired of seeing their hard-earned money evaporate into government’s coffers.” The federal and provincial governments and TransLink took in a total of $958 million from Metro drivers last year through taxes at the pumps, and the CTF calculated that will rise to $1.02 billion this year.

TransLink's portion will account for more than $350 million – the biggest chunk – while the federal government's 10-cent tax pulls in $208 million from Metro, provincial gas tax of 8.5 per is worth $177 million, the carbon tax of 6.67 cents as of July will be nearly $140 million and the five-per-cent federal HST generates another $145.6 million.

Let me get this straight. The NDP oppose consumer taxes like the gas tax and the HST. Harper claims the NDP will tax and spend indiscriminately. Yet that’s exactly what he’s doing at record levels. In all fairness, John Cummings opposes the gas tax and the HST as well. That’s because he’s a conservative and Stephen Harper is not. 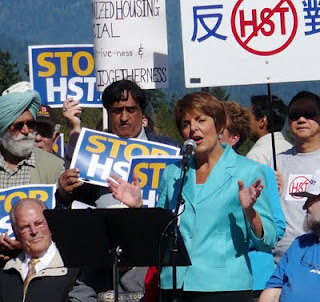