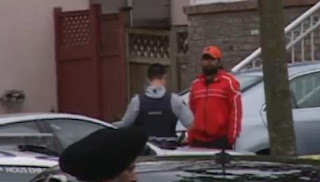 May 2nd there was another shooting fatality in Surrey. The day after Ranjit Cheema was shot dead in Vancouver. The police later released the name of the victim as Noel Jackson, from Ontario. He has a criminal record but the police claim it’s not related to the current gang tensions in Vancouver. At least they’re not denying it’s a homicide like the Edmonton PD.

Two guys died in an SUV riddled with bullets in Edmonton and the police wouldn’t call it a homicide only suspicious. I still can understand how they can say that with a straight face. Kinda makes you wonder how much things have improved there since that department was accused of leaking sensitive information to the Hells Angels when John Lindsay was chief of police.

His son was arrested not long ago in BC after stabbing an under cover police officer. His son was convicted of assaulting his former girlfriend who went missing the day he was released from prison. I’m sure Dana Turner’s family is waiting to hear about news on their daughter’s murder.