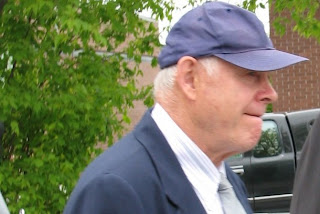 Great. Why do these guys always come to Surrey? Front page of the Surrey Leader is a story about a man living in Surrey described in court as one of Canada’s most prolific sex offender who faces seven more charges of sexually assaulting young people. The guy is a former Scout Leader and former Anglican Priest.

Ralph Rowe is the Ontario man now living in Surrey who has just been charged with seven more offenses. Those offenses arise from time he spent in Manitoba and Ontario on First Nations reserves conducting church services and youth events. Holy blasphemy. That is tragic. More cases of First Nations children being sexually assaulted. That historic pattern is very disturbing. I just don’t understand it.

Rowe has been incarcerated twice before for multiple sexual assaults involving boys as young as six. At his first trial, Rowe pled guilty to 39 counts of indecent assault involving 19 boys and was sentenced to six years. Under the terms of his plea bargain, he would serve no additional jail time if convicted of other similar cases. I’m not sure what that means. Six years for all those offenses is unjust. Especially when you add mandatory statutory release to it which means he likely only served 4 years out of the six on his first conviction.