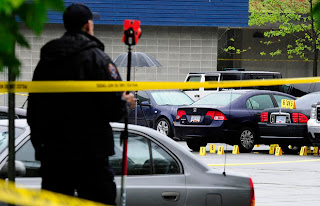 The Duhre/Dhak Pack are connected to the UN. They buy their drugs from the UN not the Hells Angels. That is why they are getting wiped off the face of the earth. Even Kim Bolan agrees that in this recent “gang war” the Dhak-Duhre gang has suffered the most violence. Now she's even composed a list of nine members of the Dhure / Dhak Pak that have been shot in less than a year with zero casulties on the "other" side. The violence is very one sided. I had eight in my list May 5th but that was before Wednesdays shooting.

The Duhre/Dhak Pack was not responsible for the Kelowna shooting that killed Jonathon Bacon and wounded Larry Amero. They might have been in Kelowna and told someone what they saw. They might have told someone that Larry Amero and Jonathon Bacon finally came out of the closet and were publically bragging about their association but they didn’t do the hit.

No this new gang war is simply Eric Sandberg’s prediction coming true. He told agent 22 that “they” were ready to wipe out all the competition in Surrey. That is what this recent violence is all about. The Hells Angels violent control of the local drug trade.