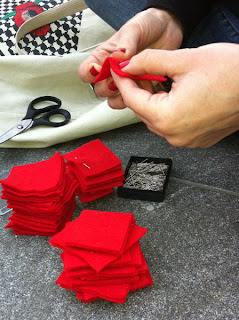 Another concern I have with the striking university students in Montreal is their red patch logo. Surely with such a longstanding history of the biker war in Quebec, everyone there knows what a red patch means in the biker community. If you don’t know, you’re gonna have to find out for yourself.

For the rest of us, the red patch or the red square represents Stalin’s death camps, red square in China and the wrong side of the Berlin wall. This is what I mean by mindless blind sheep. Every time there’s a protest, extremists from the Marxist Leninist party show up with a Communist flag. No one really pays them much attention but everyone has a right to their say. Yet we need to be clear what that flag is really saying.

There is no charter of rights within the Communist Manifesto. Everyone talks about how bad totalitarian states are. Indeed we should. Let’s take Poland for example. They were screwed first by Hitler’s Nazi’s then by Stalin’s Communists. You ask anyone from Eastern Europe before the fall of the Berlin Wall and you ask them how they feel about that red patch. In East Berlin they had barbed wire and machine guns pointed inwards. So no one could escape.

Lenin wasn’t the leader of the workers revolution in Russia. Shiplov was. When the trade unions had a complaint and went on strike, Lenin sent in the machine guns with live ammunition. The families were too afraid to even collect their dead. That is not a free republic.

In Ireland the term republican has a very different meaning than it does in the US. In Ireland a republican is anyone who believes in a free republic as opposed to a dictatorship. James Connolly was a communist. Yet he supported a free republic where individual rights are protected. That is not what we saw in Russia, China or Eastern Europe.

Free education is a wonderful goal. Australia has it and I’d hardly call them a Communist dictatorship. Yet it’s a goal we have to work towards. Alberta is what people see as right wing. They don’t have sales tax and as a result business prospers. Since they are doing so well financially, the provincial government pays the premiums on everyone’s medical insurance. That is a great idea.

Yet there are some serious problems we need to fix first. Harpers bank bail out is one. The BC Hydro fraud is another. If we want free university education we have to talk about where the money is going to come from. Do we raise taxes? Do we close homeless shelters and old folks homes? Or do we nationalize crown corporations and use those profits to add to the tax revenue? That is my preference.

Yet nationalizing the oil industry in Canada will meet huge opposition from the wealthy oil companies who are consumed in their greed. In the mean time, I will not wear a red patch. To me that is no different than wearing a Nazi Swastika. It is offensive. It represents just another totalitarian society created by lies and false promises. From one extreme to the other.

Free university education is a worthy goal but it is not a right. Buyer Beware.