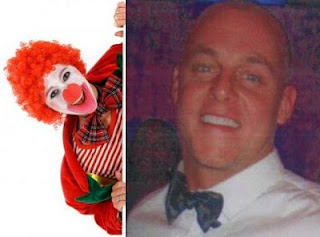 A couple of blog readers sent in this link to a National Post article about that Hells Angels billion dollar pot for cocaine drug ring that was supplying the Big Apple with BC Bud. Turns out they were supplying LA as well. So much for all that California chronic.

Alessandro Taloni pleaded guilty in New York City yesterday to international cocaine trafficking. He was from Montreal and was sent to pick up the money in LA. Plane loads of it.

This time the fall guy for the Hells Angels drug trafficking ring is Cosmo the clown. How fitting. Spin the wheel to find out who the next mule will be that gets busted. Be assured this ring will continue because the Hells Angels still own all the same BC grow ops and control all the same Canadian crack dealers. Just like in the Rob Shannon ring and the Randy Jones ring out of Tbarz. Oops, I said it again. I mean Shakerz.

If these guys were really interested in stopping the drug ring they would put wire taps on the BC Hells Angels since it’s the BC bud that’s driving this international cocaine ring. Somebody like Randy Jones for example. But they won’t do that because the Agency is protecting him. Just like how the RCMP protected Weird Hal in Operation Phoenix and David Giles in the Western Wind.

Why am I so pissed about all this? Because look at what’s happening. The States is getting all the BC bud. Big deal. We’re the ones getting all that crack in return which is destroying lives and communities. Gary Webb said the CIA were responsible for the US crack epidemic in the 1980’s. He was right. He documented everything. Freeway Ricky didn’t know at the time he was selling crack for the CIA and was funding the contra rebels in Nicaragua but he was. Likewise, I submit that the Agency are the ones responsible for the current crack epidemic in Canada. Just ask Michael Riconosciuto. Remember, keeping an unlawful secret is unlawful.

Posted by Dennis Watson at 9:25 PM