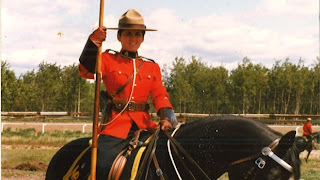 This next story is an example of the evil from within that still needs to be addressed. Tuesday the Vancouver Province along with several other media outlets reported that Staff-Sgt. Caroline O’Farrell, a former RCMP officer and member of the Musical ride team is suing over more allegations of sexual harassment.

We know that there is a huge class action law suit against the RCMP for ongoing sexual harassment. Although the Harper government is still pursuing the same old response of denial and slander the whistleblowers, there are more than enough documented cases that clearly show sexual harassment in the RCMP was a huge problem and it was tolerated and covered up by senior RCMP management. Case in point, Don Ray who came to BC without being fired. Even the Surrey police Chief Bill Fordy, who was one of the Pickton investigators that has been accused of sexual harassment, has himself been accused of covering up sexual harassment while he was in management.

Court documents claim O'Farrell was repeatedly subjected to a ritual known as horse-troughing - grabbed by the arms and legs, sprayed with cold water, then dragged face-down through riding school shavings mixed with manure and urine. Members then kick the mixture onto the subject's head so it is caked onto their body, face and hair.

Let’s stop right there. Although the court document claims the hazing practice has since stopped it did happen. That needs to be addressed. A man who does that to a woman is not a man. One is tempted to use the word animal yet animals hunt for food. That kind of deranged behavior is below them. Any man who does that to a woman is a shameful excuse for a human being. Since today Google is celebrating the RCMP’s 140th anniversary let’s remember that fact.

These were police officers who claimed to be the country’s finest. In reality, they were far from it. They were simply arrogant criminals who dishonored the nation. The fact that some of the criminal participants still work with the RCMP and some are even in positions of management, does need to be addressed. I’ve heard it said from a distinguished officer in another police force that the RCMP think their sh*t doesn’t stink. Clearly it does.

Bob Paulson called allegations of assault by fellow officers from a former Musical Ride member “old news.” So much for our high hopes in Bob Paulson. I guess that’s why Harper picked him.