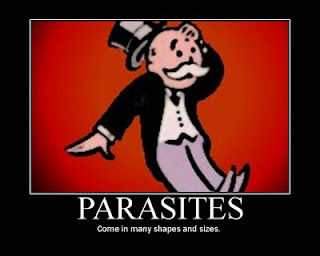 I would like to say a word about the Tapeworm Economy Catherine Austin fits talked about and how it effects us locally. We know how it affects us globally. We have seen that in Greece and we have seen how the corruption in Wall Street and the big banks that helped hide Greek’s debt have committed investment fraud to line their own pockets at taxpayers expense. Like always, a white collar thief is much more effective then a two bit thief on the street.

Yet I do want to talk about how the two bit thief on the street is as we speak nickel and diming local businesses to the point of sucking their profit margin just like a tapeworm or a parasite. I first heard Catherine Austin fits use the term Tapeworm Economy in her four part interview on the Looting of America. This is a two minute condensed explanation of the concept.

In the Looting of America video, she talks about the Gary Webb story and how credible that really is. In fact she refers to it as fact, then focuses on the actual money laundering that resulted from it. She cited the lawsuit in Europe brought against RJR Nabisco for money laundering. RJR Nabisco was owned by KKR, a huge investment firm on Wall Street. Fitts also pointed out how New York Stock Exchange Chairman Richard Grasso went to Columbia reaching out in support of FARC in her series on Narco-dollars.

Locally a security firm that is hired to oversee various grocery stores chains in the lower mainland has reported that last month they made more arrests than they ever have in their history. That means theft is rapidly increasing. The majority of these thefts are things easily resold like meat, cold medicine and dvds. The majority of these thefts are drug addicts stealing to support their drug habit. That is how this money laundering from drug trafficking is sucking the real economy dry just like a parasite.

Any business, large or small, has a hard time dealing with such an intrusive attack on their bottom line. Profit margins disappear when so many addicts are stealing from them at a rate that is difficult to control. When we hand out free crack pipes and let crack dealers sell crack in public, we are fostering this attack on business through chronic theft to support their addictions. Giving addicts free drugs is not the answer. That will bankrupt our sacred medical system faster than anything. Arresting crack dealers, not the addicts is the answer. It really is that simple.

All the drug kingpin clowns like David Giles and the other idiots driving around in hummers get their money from addicts stealing. Their life of luxury is a parasite living off others who work and strive to maintain their own businesses. This also applies to the politicians who accept campaign contributions from companies that launder drug money. Such as the dirty developers who launder drug money through real estate as well as the Casinos who profit from the money laundering that goes on in their facilities. These politicians are not role models. They are parasites just like the drug dealers driving around in hummers.

Posted by Dennis Watson at 9:29 AM