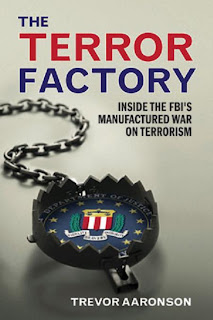 In his new book, The Terror Factory: Inside the FBI's Manufactured War on Terrorism, investigative journalist Trevor Aaronson analyzes 10 years of terrorism cases that were prosecuted in the United States after Sept. 11. By assembling a database of the cases and going through court records, he concluded that the FBI, which receives $3 billion per year for counterterrorism, is "the organization responsible for more terrorist plots over the last decade than any other."

Speaking of which, the AG claims Canada can’t account for $3.1 billion in anti-terror funding. Losing that much money is grand theft. I wonder how much of that money was spent on entrapment or is that recorded in the other budget.

Are We Catching Terrorists? Or Creating Them?