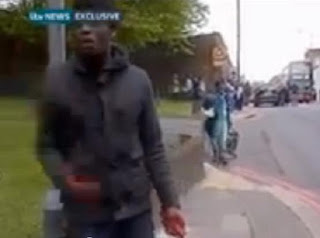 I had heard the news about a soldier attacked in London recently but didn’t think much of it. Until a blog reader sent me this Youtube video. I didn’t realize the soldier was beheaded and the assailant stayed around to do an interview on a bystander’s iPhone. That’s where the story becomes so absurd it loses it’s believability.

The commentary points out some very real concerns with the video. Like how calm the guy is right after beheading someone and how he only has blood on his hands. There’s no blood splatter anywhere else. Not even on the victim which can be seen in the distance wearing a white shirt. There isn’t even blood on the ground near the victim after his head was supposedly cut off. We’ve seen some pretty gory images of Canadians linked to the drug trade brutally murdered in Mexico. The thing that surprised me about those photos was the amount of blood everywhere. Here there was nothing like that.

Probably the most absurd thing the Youtube video pointed out was that as this guy is calmly giving a live interview on a bystanders iphone holding a kitchen knife and meat cleaver, a woman with a shopping cart of groceries walks right past him which is clearly edited out of the video. You see her approach him and they stopped filming for her to pass, then resumed filming. The whole thing is surreal. She walks right past the scary murderer without even crossing to the other side of the street.

I remember being at the George Bush demonstration at the Sheraton in Surrey. Someone from the Vancouver 9/11 Truth Movement was standing on the sidewalk with a megaphone shouting straight into the lobby 9/11 was an inside job over and over again. That had to be irritating. Yet if 9/11 really was an inside job, wouldn’t that make you want to scream?

As he’s doing this a cop walks up to him and we all brace ourselves in anticipation thinking he’s gonna pull a Rodney King and we’re all gonna get in a throw down. Instead the cop simply pats him on the back as he walks past and says good job. We were all so shocked we all started laughing. Clearly the cop was trying to embarrass the guy but he let him have his right to free speech and lawful assembly. After all, that is a charter right. That’s what our forefathers fought in war for. Taking that right away is in itself an act of war.

There’s a lot of talk about the Sandy Hook hoax as well. I don’t know much about that one other than the fact that Anderson Cooper, who has worked two summers for the CIA, was caught using a green screen to fake one of his interviews at the Sandy Hook funeral and some people think green screens were used in the actual Sandy Hook footage. It takes big brothers manipulation of the media to a whole new level.

Recently, two members of an elite FBI team that were involved in the shooting of the Boston Marathon bombing suspect have mysteriously died in a training accident. I guess that means they can’t be subpoenaed for an inquiry. This elite FBI team is a huge concern. Centralization in this case is not a good thing. It’s easier for corruption to control.

In Russia when the new KGB were caught red handed trying to set off a false flag attack in Chechnya, two local police officers investigated what locals saw and found the bomb before it was detonated. The new KGB said it was just a training exercise and it was a fake bomb yet local authorities said it was real. This new elite FBI team taking over for local SWAT teams is a huge concern. Especially when we see documents like Operation Northwoods flying around.

A friend of the suspect in the London beheading video claims MI5 tried to recruit the suspect. Although he claims he declined the offer, clearly he accepted it. As a false flag actor. 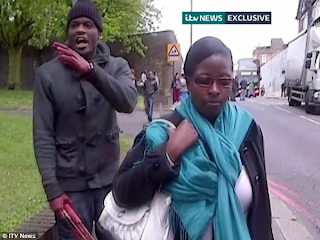