BC Government says no to Gateway but Alberta says yes 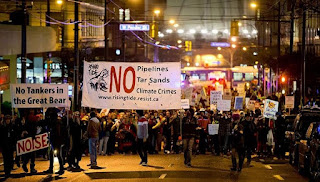 Although the BC Government has said no to the Northern Gateway proposal, Alberta still wants to cram it through by going through the federal channels since Harper took BC out of the equation in the decision. For BC to say no and for Harper to cram it through anyway would be an act of war. Jail would be too good for him.

The Alberta Premier already said our concerns were absurd so there really is nothing left to discuss. An oil spill on land or on sea is a huge concern. Especially when it’s not oil it’s this toxic precursor to oil. The mountain of Petroleum coke refining that crap produces is another concern. It’s not that much money for BC. It’s financially not worth the risk. Especially when they refuse to give us a break at the pumps and insist on screwing us at the pump thanks to their government sponsored monopoly. Enbridge has shown to be irresponsible in pipeline maintenance. 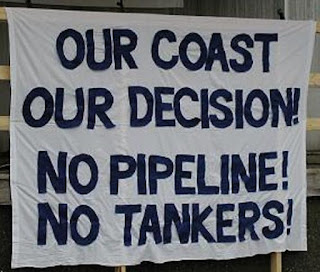 Brian Mulroney’s Barrick gold, the shady gold company founded by an arms dealer, has been fined $16 million by Chile’s environmental regulator for very serious violations of its environmental permit. Here in Canada, Stephen Harper rewards corporations for destroying the environment.

The Environmental Superintendent said all other construction work on Pascua-Lama must stop until Barrick builds the systems it promised to put in place beforehand for containing contaminated water. Instead of building the canals, Barrick’s bulldozers went ahead and moved mountaintops in preparation for a projected 25 years of gold and silver production. Moved mountain tops? Why that’s exactly what Imperial Metals wants to do to Catface Mountain in the middle of a protected biosphere.

Meanwhile, protesters at a Canadian mine in Kyrgyzstan, Russia blocked a road and cut off power to the mine desirous the mine be Nationalized. That means the profits would go to the people not a fat cats pocket like the oil in Mexico. Kyrgyzstan is south of Kazakhstan.