Glen Beck off the Hook 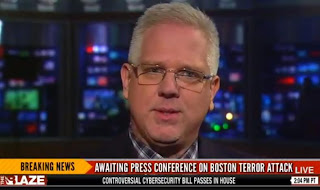 I’ve heard of Glen Beck but I’ve never really followed any of his shows. Just a couple of short clips on YouTube. I was under the impression he was a sometimes controversial right wing talk show host that hates Obama. Recently he broke the news about how the IRS was targeting the Tea party and groups with radical names like constitution and things of that sort. The IRS was harassing them with ridiculous demands. So Glen Beck broke that story and it turned out to be true. Obama claimed he just found out about the IRS scandal on Friday but a guest on Beck’s show contradicts that claim.

He appears to be going on about a Saudi National. Yet the suspects were from Chechnya so I’m having a bit of trouble following his logic. The point I want to make is that this guy totally believes in the US use of false flag operations. He’s not a dope smoking leftist hippie either. He’s a crazy right wing conspiracy theorist. Well, I thought the crazy conspiracy theorist were left wing. Looks like we have clowns to the left of us, jokers to the right here I am stuck in the middle with you.

Yet I do think we would be foolish not to examine and consider the existence of false flag attacks. They were used in Russia. In 1999 they were caught red handed. The thing is, those attacks were blamed on Chechen terrorists. The point of the Graham Fuller article was that his home address was used as the headquarters of the Congress of Chechen International Organizations. The CIA funded those Chechen terrorists. That’s big news in Russia right now. They are pissed.

As for the Tea Party, I was sure I read in the Wikipedia article on the Tea Party it said that they supported a resolution pushing for a public inquiry into 9/11 yet that description isn’t there any more. Nevertheless, when you Google Tea Party and 9/11 it’s pretty clear that many in the Tea Party thought 9/11 was an inside job and want an inquiry. That’s another large group of people.