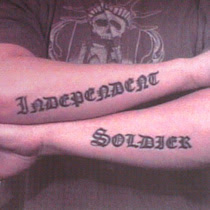 Last Saturday night a 48 year old Kamloops man named Glenn Powell was shot in the leg in what police describe as a targeted attack. He claims he was shot by members of the Independent Soldiers because they wanted him to start selling drugs for them. Interestingly he claims he used to sell for the Hells Angels who the IS work for. Kamloops IS have been charged in that kidnapping case of the guy tied to Glen Hehn who owed them money.