The Majesty of Clayoquot Sound 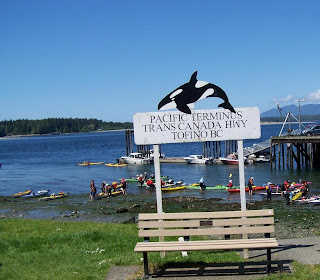 My main focus on my trip to Vancouver Island was to go kayaking in Clayoquot Sound. I had heard they started to log it and wanted to check it out. Actually it was revisiting it. I visited Estavan Point when I was very young. You had to take a float plane from Tonfino to get there. I had no idea that whole area is referred to as Clayoquot sound. The place that was the source of all the protests when Macmillan Bloedel wanted to clear cut it. 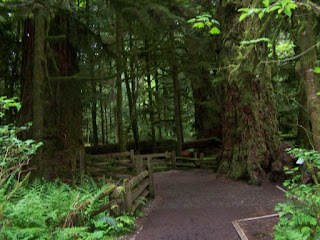 I stopped off at Cathedral Gove on the way. I remember hearing a concert band play a piece written by a local composer named Robert Buckley that represented an eagle flying over the old growth trees in Cathedral Grove and descending upon them. Cathedral Grove is well worth the visit. You stop the car get out and the old growth trees are right there. No strenuous hiking or paddling to get to them. It is inspiring. Their plan to log it is not. We have to protect that heritage site. 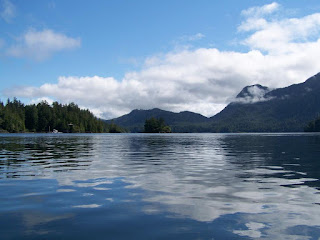 Kayaking in Clayoquot Sound was very enjoyable. It’s a lot like Deep cove but is a maze that is far larger and more complex. I was surprised how shallow the water was at some points. The thing you have to know and plan around here are the tides. The area is well protected from the waves but the currents can be significant if you are paddling a kayak. I saw an heard lots of eagles. It’s nesting season. There are two eagles nest just across the water from Tofino.

On Meares Island there is a big tree trail that you can see some old growth trees. Old growth trees are very impressive. Since I was born in North Vancouver I’m well familiars with forests. Yet the old growth forests are really inspiring. 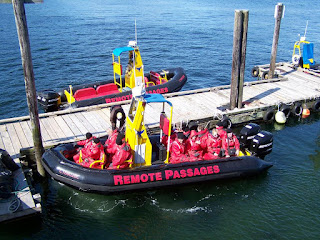 I had heard there was lot of whales in the area so I joined a whale watching tour on a zodiac. I was amazed at how close we could get to the whales. They showed an short video clip from a documentary about herring spawning in Clayoquot Sound. How ll the other wildlife comes for the influx of food and how the shallow water is blanketed in fish eggs that creates a feeding frenzy under water. That’s what the Humpback Whales come for in March.

The Grey whales don’t have teeth the have baleen. A natural sieve to scoop up the tiny shrimp that is their primary diet source. The sea Otter has returned to Clayoquot sound. That is significant because they eat the sea urchins that become over populated and cut off all the bull kelp. The bull kelp is where the type of shrimp the Grey Whales feed on can be found. Locals talk about a time when the bull kelp forests were so large it held back the ocean swell. The thing I was so overwhelmed with is how everything is so connected. The ecosystem is so intertwined. Protecting it is so essential for out own survival not just some species of fish. After all, we get most of the oxygen we breath from the ocean. We are inter dependent.

Sadly, Clayoquot sound is no longer protected. Some areas are but they call it a biosphere and included development in their definition of the biosphere. Development mean logging. They even wanted to use dynamite to blow off the top of Cat Face mountain for a mine. That is the epitome of corporate greed.

There is a lot I want to saw about my eco epiphany but there are many other gang related issues I need to catch up on. Suffice it to say nothing is protected any more. Just like the “Green Space” protected land in Twassan the BC Liberals rezoned to turn an important bird migration stop into a shopping mall. The BC Liberals just don’t get it. Neither does Stephen Harper. He just unprotected every lake and stream in Canada with one sweep of the pen to ram this oil pipeline through. 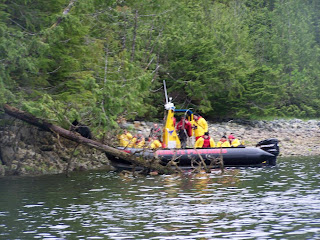 Clayoquot Sound had an oil spill in the /80’s. It was horrible. That’s why they don’t want to go through that again. The area is just finally starting to recover. There has to be another way. I stayed an extra day on my trip to go on Bear Watching by zodiac. I didn’t realize bears will turn over rocks at low tide and eat crabs and barnacles. That makes it pretty easy to find them on a tour. As ong as you go at low tide. We was five bears on the tour. 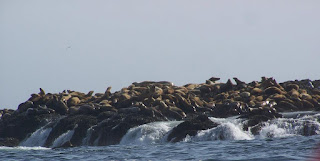 Saw a huge group of Sea lions as well. They have just started to return to the area as well. The reason Calyoquot sound is so important is because it is a main stopping point for the Grey Whales and the Humpback Whales in their migratory journey. They matte and give birth in wam=rmer waters but they come back up the coast to eat. The cold water oceans are where all the food is. Destroying that fiod supply for all the grey and Humpback whales would devastate our ecosystem. You’d think that as we became more technologically advanced we’d also become more environmentally aware. What we do to the environment effects us and future generations directly.

Oh and a word about Fish farms. I am totally against them. There are tons of fish farms in Clayoquot sound and the wild salmon stacks are mysteriously being devastated. Sea lice is a concern as well as Atlantic salmon escapes. The fish farms are full of sea lice and diseases because they are confined in a small area. Wild salmon swim by a fish farm and pick up the sea lice or other disease. Most of the foreign companies that have fish farms in Clayoquot sound use Atlantic Salmon. They tried introducing the species on the west coat but since they weren’t born here the didn’t spawn. They just swam up the rivers and ate all the fry. I spoke with a couple of locals who had worked on fish farms there and they said when the media are told there was 2,100 Atlantic salmon that escaped it is really more like 21,000. That attacks the fry in all the local streams. When they sell Atlantic farmed salmon in the local stores it’s more likely Atlantic salmon farmed in BC. Don’t buy it. Just like buying dolphin friendly tuna don’t buy farmed salon. Period. Oh yeah and there were lots of surfers at Long beach. 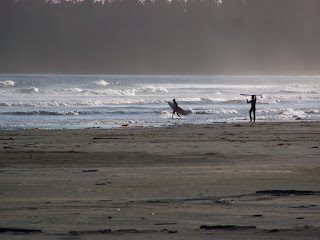 They even want to log Cathedral Grove. These people are absolutely insane.