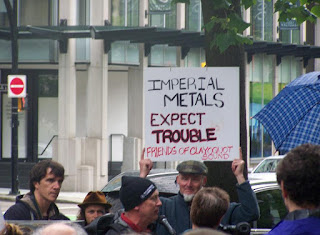 Friends and residents of Clayoquot Sound in Tofino were protesting today outside Imperial Metals AGM in Vancouver. Imperial Metals wants to blow the top off of Catface Mountain and turn it into an open pit mine. I kid you not. It’s a mountain in a protected biosphere. It is astounding how anyone can be so irresponsible. A lot of people don’t know this insane plan is being proposed. 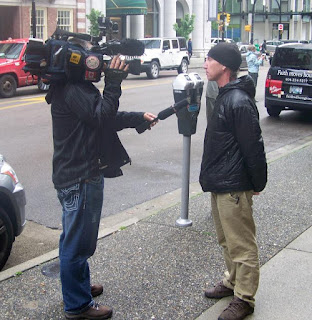 Raising public awareness is the first step. Shareholders need to know that kind of gross negligence will create a knee jerk reaction from locals and supporters from all over the world who fought to save that pristine ecosystem back in the /80's and in the summer of 1994. 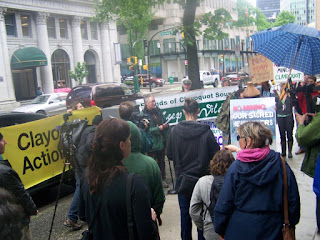 As investors we need to blacklist Imperial Metals. For considering this plan they are a no go – do not invest. That means pensions, stock investments whatever funds are invested in them need to be withdrawn. If they are showing that kind of complete irresponsibility in this project, God knows what they have planned for the rest of the province. We need to boycott Imperial Metals. Catface and Lonecone Mountains are the centre point of Clayoquot sound. Everyone from all over the world who goes on a whale watching or a Bear watching tour see that wonderful landmark as they go past it. Destroying the ecosystem as well as the local tourist industry is irresponsible. 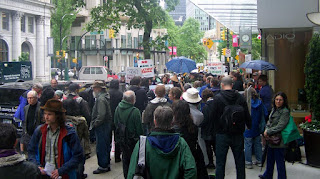 Recently, over by Ucluelet, Toquaht Bay marina has been closed down because they found arsenic, selenium and cobalt which effects everything in that area including all the shellfish. This is a pristine boat launch for the Broken Islands.

Turns out the poisons were dumped there from a local iron ore mine that shipped iron to Japan in the /60’s. 50 years later the toxic damage to the local ecosystem and tourist industry is just being discovered. We need to wake up and be better stewards of the environment we live in. It’s time to visit Tofino on Vancouver Island and see this wonderful ecosystem before it’s destroyed. 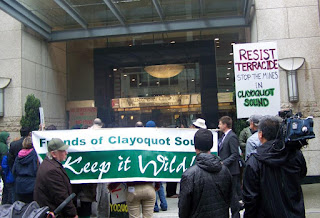