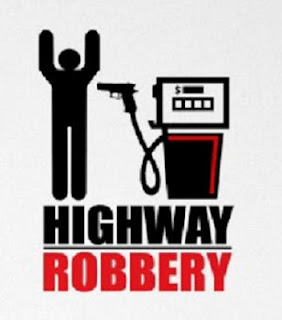 This morning I filled up with gas in North Van at 143.9 cents per litre. That’s a nine cent a litre hike over night on top of the extra ten cents a litre Surrey and Vancouver pays for Translink more than Aldergrove and Abbotsford pay. By the time I come back to Surrey it’s at 137.9, a three cent hike instead of a nine cent hike. Evidently they were just acclimatizing us again to appreciate the 3 cent over night hike instead of 9 cent.

The bottom line is that this is highway robbery. This election the candidates have been discussing the gas tax. The BC Conservatives and the NDP opposed it. Harper’s pal Gordon Campbell and now Christy Clark support it. Excessive gas taxes are one thing but we are still failing to address the root of the problem and that is the oil company’s monopoly on the market.

They can charge what they want when they want and rob consumers at will. That is not a free market driven by supply and demand. It is Corporate Communism in action. Even more so now since we are now funding Communist China’s military expansion every time we fill up at the pump since after helping the oil companies get a monopoly, Harper sold that monopoly to China.

As public outrage increased and the media continued to write about monopoly corruption, in 1911 the United States Supreme Court ruled that Standard Oil was an illegal monopoly. They ordered Standard oil to dismantle 33 of its most important affiliates and to distribute the stock to its own shareholders and not to a new trust. The result was the creation of a number of completely independent companies.

Today the oil monopoly has returned to destroy the free market and there is no public outrage and there are no media articles about it. That’s because the big Corporations that strive for corporate monopolies own the media and control it through advertizing dollars. Standard Oil has served as the textbook example of why we need antitrust law -in the business world in general and in the energy business in particular. Did I mention the Rockefellers funded the Communist revolution?