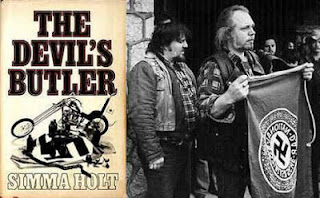 I forgot to comment on this at the time. Please forgive me. Readers sent me links to the story about how the Hells Angels refused to pull over for a police roadblock on Vancouver Island earlier this month. I didn’t think much of it since I agree the charter of rights protects everyone from unnecessary searches and seizures.

The thing that gets me is that Rainbow Ricky claims he was leading the pack and the police tried the same thing in Calgary back in 1997 and the courts overturned it. What the hell was fat ass Rainbow Ricky doing leading the pack? That means he’s either the president or was riding beside the president. The Sargent at Arms usually rides at the back to keep everything together.

Since Rick Ciarniello is still their spokes “person” and was leading the pack of criminal misfits, we still need to ask him about his involvement with all the gang that was convicted in the case of the Devil’s Butler back when he was a member of the Satan’s Choice. That was the case where they kidnapped a guy and sodomized him with a broomstick after they made him masturbate naked in front of them standing in a bucket. That's some pretty seriously messed up issues. What on earth is a guy like that leading the sorry pack and speaking on their behalf?

The next time he complains about people not wanting to sit beside his smelly fat ass in a restaurant because they don’t want to sit beside a member of a criminal organization, we need to ask him that. How on earth does he rationalize associating with a group that enjoys sodomizing guys with broomsticks? The wiretaps at the time said that wasn’t their first offense and that they had found “another” butler. I guess I was right about Rainbow Ricky all along. 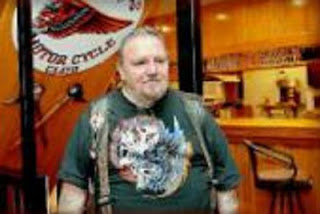