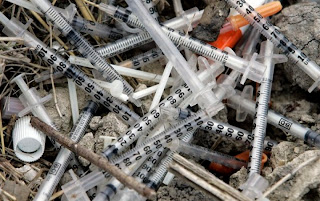 After such a wonderful long weekend I come back to the same old insanity repeat itself here at home. There are still several stories to catch up on but these next two clearly show how real the struggle between good versus evil really is. One conflict is obvious. It’s coming from the outside. The other is even more disappointing. It comes from within. Pivot Legal is suing Abbotsford because they don’t support needle exchanges. Now I know Pivot Legal mean well. I know they are sincere in their beliefs. It’s pretty hard to get lawyers to donate their time for a legal cause. Yet if you pause to connect the dots, this is really the wrong cause.

VANDU, the Vancouver Drug User’s Network, is a criminal organization. Their group has absolutely nothing to do with harm reduction. Their mandate is to promote drug use and drug abuse. They throw away the four pillars program and just scream harm reduction over and over so they can promote drug addiction. This clearly supports the Hells Angels drug trade.

The idea behind needle exchanges started off as a sincere attempt at harm reduction. Two changes to that program made it fail miserably and become a major tool for drug promotion. The first change was throwing the idea of a needle exchange out the window where they just started handing out free needles. The original idea was hand in a used dirty needle and get back a new clean needle. I agree needles are cheap but this has caused three huge problems. Changing the program to just handing out free needles created the obvious problem. Drug users would use the new needle and cast it aside knowing they would get another new one. This means the used needles were ending up all over the place including in schools and playgrounds.

Using harmful drugs is not a charter right. Forcing taxpayers to buy needles and drugs for addicts is not a charter right. As passionate as I am about what the Charter of Rights really is, that is not it. Sometimes we see volunteer groups become consumed in political agendas. Abbotsford is known as the Bible belt. Some people take offense at other people’s freedom of religion when they include morals in their beliefs. As a result they passionately fight against anything moral. Which is insane since we have already established all our laws are based on morals.

It is wrong and illegal to steal. It is wrong and illegal to commit murder. It is wrong and legal to commit rape. Everyone has morals so destroying some people’s freedom of religion just because you are uncomfortable with their standards is unconstitutional. That is a violation of the Charter of Rights they so quickly quote and distort. God help us if a judge awards in their favor and further distorts the Charter of Rights into the insane concept of forcing communities to hand out free needles at taxpayers expense if they chose not to. We know their next step will be to try and force tax payers to buy addicts free drugs like they are doing right now at Insite. That would bankrupt our medical system faster than anything. You can’t get an MRI but you can get free heroin at Insite. That kind of insanity has to stop.

Unfortunately it won’t stop because the threat of legal action has Abbotsford City Hall caving in to the spoilt brats who want to bankrupt our scared medical system and feed the Hells Angels drug war. Our real charter rights are once again being thrown out the window in favor of organized crime. This is not the New York Model. It’s not even the Four Pillars Program. It’s the promotion of crime at taxpayers expense. Dirty needles all over town is a health hazard.

Free needles killed that girl at Ocupy Vancovuer who over dosed on heroin with a free needle from the city. Free needles didn’t save Ashley Machiskinic or Janice Shore. It helped cause their death. Helping people use poison has nothing to do with health promotion or access to medical care. It's time to stop perpetuating that same old lie.