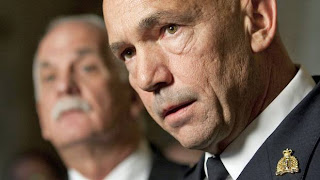 More control freak harassment from Vikileaks Toews has been released thanks to the Freedom of Information Act. No doubt removing that act will be the Harper government’s next step towards a totalitarian government.

From everything I hear Bob Paulson is a step forward in the administration of the RCMP. People want him to repair the broken reputation the RCMP has in the public’s eye with regards to the many sexual harassment complaints within that organization. Yet every time he tries to amend the situation, Vic Toews slams him for doing so because he wants Paulson to deny everything and sweep it under the carpet. He doesn’t actually want him to address the problem.

Part of it is the court case. The government has denied everything and slandered the complainants because they don’t want to be legally liable for damages. Once again it comes down to money. The reason the lawsuit has been filed is because despite the ongoing sexual harassment at the RCMP, up until now, the administration has done nothing about it.

Setting the court case aside, there is more than enough documented evidence to show that there is a real problem with sexual harassment and cover up within the RCMP. Case in point, Don Ray. Vic Toews says he wants to give the RCMP more power to fire people like Ray when his actions show that is the least of his concerns. His actions show he would take those powers and fire whistleblowers who rock the boat.

So Vic Toews, under Stephen Harper’s iron fist of denial and slander of whistleblowers, perpetuates the problem. This government wants a very big brother type of control of the RCMP. They don’t want the RCMP to speak to the media without their knowledge and approval first. Yet what if the RCMP is investigating them like in BC Rail?

Two problems arise. They want complete control of everything the RCMP says and does, then they want to throw away the Charter of Rights and give the police the power to spy and arrest civilians without charge. Reporting everything back to them of course. You can’t get any more big brother than that.

Vic Toews is the guy that said if you don’t support our crime bill, you support pedophiles. Then when the media pointed out it gave the police the power to spy on people who haven’t even been accused of committing a crime he said he was surprised to find that in the bill. Implying that he hadn’t read that part yet he was the one pushing it. Just like this new illegal bill that violates the Charter of Rights.

This is the good Christian who had an affair on his wife and fathered a child with a younger woman. Of course what he does in his private life is his business, but don’t pretend to be a good Christian and pimp the religious vote when you are the exact opposite. What the bible would describe as a wolf in sheep’s clothing. We were warned about people like him. Buyer Beware. 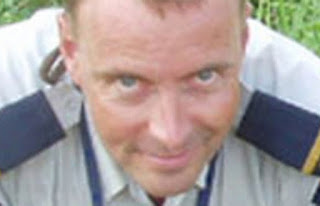