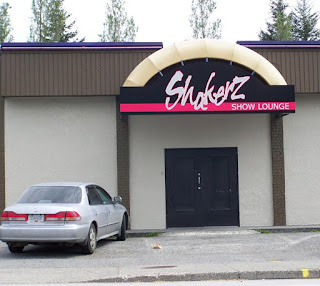 Say hello to the new boss. Same as the old boss. This time, I get on my knees and pray, we don’t get fooled again. Looks like the Tbarz renovation scam to hide from the proceeds of crime legislation is continuing. Now they finally changed the name to Shakerz instead of just posting a sign out front saying under new management. They’re even starting to play hip hop to cover their trail. Mind you they tried that when it was Tbarz under Randy Jones’ ownership too. 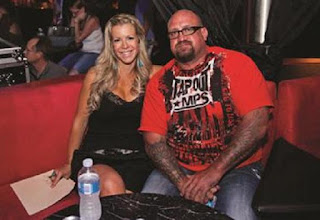 Maybe Greg Wooley will make a special appearance to get all the local brothers slinging crack for the red and white supremacists. So who owned the Harleys parked out front during the renos? Does CJ Barroby sill provide the strippers? If so, nothing has changed. On April 25, 2004, Micheal Plante delivered 2 pounds of Randy Potts’ crystal meth to C.J. Barroby at a price of $18,000.

The Hells Angels have always tried to hide their ownership of that strip club. When the land title was in Randy’s mother’s name, it was owned by Randy not by his mother just like the Tbarz domain name. When the Dank domain name was registered in Trevor’s name it was really owned and controlled by Randy, the Walrus himself.

When Tbarz was in the Asian investors’ name, it was still owned by Randy Jones and the Hells Angels. How Yin Leung was the Acting General Manager while Randy's brother Trevor was listed as an Agent. The owners at the time were listed as Shu Jiun Dong and Xiao Fei Huang. Putting it in someone else’s name doesn’t change the real ownership. Kim Bolan is reporting that Randy Jones in now in the Surrey Girl chapter of the Hells Angels. That means he is still very much involved in the Surrey drug trade. That would relate to Janice Shore's brutal murder.