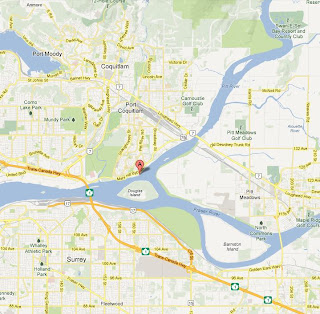 A body was found floating in Pitt River May 1st. The body was found at 7 a.m. by someone on the water, not far from shore near Harken Towing. For those who aren’t local, the water flows from right to left on the map. I was hoping to get an id on the body but it doesn’t look like that’s forthcoming but will update when it does come. It could have even come from Pitt Lake.

It’s reminiscent of the body that was found under the dock in Kelowna. No foul play was suspected. Oh really? Usually when there’s a boating accident, someone in the party notices someone in their boat fell overboard. They say sometimes it’s a suicide. Oh really? Someone tried to commit suicide by jumping off the floating bridge. That’s not very high off the ground.

Update: Turns out this body was from that car accident in Chilliwack March 10th. Police recovered a woman's body in the river from the car accident but called off the search for the man's body after a few weeks. In the past, other bodies found floating in the Fraser were the result of homicide. Joshua Hendrick from the Crew in Prince George was one and Lisa Francis was another. Those both happened in 2009.