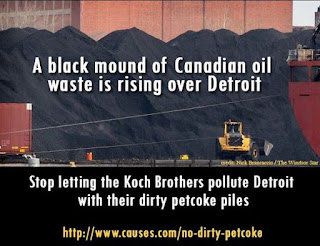 Last night Canada was in the news. A mountain of petroleum coke from the Canadian tar sands is rising in Detroit. Locals are rightfully concerned about it’s existence in their city. They claim if provisions aren’t being made for the safe storage of the tar sands byproduct now, what’s going to happen when they increase production through the Keystone Pipeline? A valid question.

Despite all our technological advances we still keep shooting ourselves in the foot with our bizarre attack on the environment. It’s the same with these idiots promoting coal in Surrey. Coal is a step backwards not a step forward. Tar Sands oil is a nightmare.

In the late /80’s back in Ireland everyone heated their homes with coal fires. In the North they had enclosed fireplaces that heated radiators that ran through the house. In the South it was just an open fireplace. Sometimes they would burn peat but mostly it was coal. The coal man would come around to the houses just like the milkman used to here back in the day.

As a result, most small towns like Cork had a huge cloud of coal dust smog that lingered over the city. Air quality was low. I mentioned this to my father at the time and he said when your mother and I were married it was the same thing in West Vancouver. You're kidding I said. That was just one generation ago. Now we have central heating. You turn a switch and a natural gas furnace heats your home or in some cases, an electric radiator. Electricity and natural gas is a step forward from coal. Propane is clean burning. We can make money without being so irresponsible.

Yet many are determined to make a buck off of sending us back in time with regards to environmental responsibility and stewardship. Remember when the rivers in Wales ran black from coal dust? We don't want that here. Oregon doesn't want Coal exports so we bring it to Surrey with welcome arms. I suppose we'll welcome the medical concerns it brings with it.

Leaving a mountain of petroleum coke in Detroit is irresponsible. It doesn’t matter how much money they spend on advertizing telling us it’s good for us. Next they will try and tell us it prevents tooth decay and will start selling it to us for our tooth paste.

So if they put the Enbrige Pipeline in BC and build a refinery in Kitimat, what's their plan for dealing with all the Petroleum coke? Dump it ion the ocean and kill all the food for the migrating Grey and Humpback wales?