The BC Election and the Christy Clark Lie 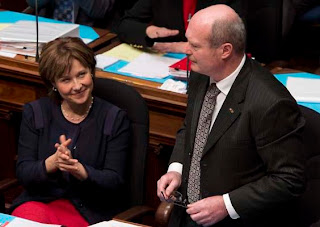 The other day I had the misfortune of waking up to another ridiculous Christy Clark add on my clock radio perpetuating the same lie and perpetual misconception. There are two things that bug me. One is the lie. The other is repeating that same old lie fifty million times on TV, radio and even at the Super Bowl. Those other ads weren’t during an election and were paid for with tax dollars. Something Stephen Harper doesn’t seem to have a problem with. Spending tax dollars on political propaganda. That is so big brother.

I’m not going to say much more about the BC election but I will say this: Christy Clark and the BC Liberals are one big lie. It is amazingly hypocritical for her to repeatedly play on an old and outdated stereotype. Oh the NDP will tax and spend. That’s exactly what they did. The gas tax was a tax increase. The HST was a tax increase. They taxed things that were previously tax except. The BC Liberals have been an enemy of small business and BC rail was nothing compared to Campbell Heights and their criminal destruction of BC Hydro.

It concerns me when Adrian Dix is asked if he will balance the budget and he says no they will work towards a balanced budget. Yet part of me is wondering if that just means he’s being honest where Christy Clark lied and committed fraud. In their last fudge it budget the BC Liberals predicted a balanced budget after several years of budget deficits. Only their projections were fraudulent. It included selling public assets and even included revenue from BC Hydro.

Under Gordon Campbell, the BC Liberals not only destroyed BC Hydro, but pushed British Columbia over the most fiscally irresponsible cliff in recorded history. They privatized the power brokers that sell power to BC Hydro. As a result, the private brokers who are mandated to make a profit for themselves at consumers and taxpayers expense, started selling power to BC Hydro at above market prices. This has created a fiscal emergency at BC Hydro. Every year they keep deferring the ballooning debt to hide it’s existence. For Christy Clark to extract revenue from BC Hydro knowing of that growing debt is absolute fraud. It is not a balanced budget.

Clearly, the BC Liberals are the most corrupt government in the history of the Province. This whole paid advertizing thing is absolutely out of control. Yes it happens during an election, but when they use tax dollars for election ads when there is no election, that is the misappropriation of tax dollars. Stephen Harper is a fiend of that as well. Using tax dollars to brainwashing us with HST lies was fraud. Christy Clark is the New Kool Aid kid. Gordon Campbell reincarnated. Remember when Gordon Campbell sent out BC Hydro cash rebates to voters right before one election? Knowing the fiscal emergency he created within BC Hydro, that was yet another fraud in that shameful legacy.

I certainly don’t endorse any political party in BC blindly. I think no one trusts any politician in BC any more. Yet I don’t share the same fear of Adrian Dix that Christy Crunch does. I do think replaying on that same old stereotype that the NDP will tax and spend is really getting irritating when that is exactly what they did. I agree with the president of the B Liberals in Surrey who said most of us are thinking the NDP can’t be any worse. Right now the BC Liberals are still out of control. The Surrey high jacking of the candidacies is evidence of that. Tied directly to Godzilla’s council.

I do like John Cummins and agree with much of what he has to say. My only concern is what happens when he retires? Who’s going to take his place? Is it going to be another Stephen Harper to destroy the party like he did after he took over for Preston Manning? At least the BC Conservatives survived the BC Liberal infiltration. That was a dirty deal indeed.

John Cummins predicts Adrian Dix will win the election and that as the BC Liberals fade away, the BC Conservatives will rise again. I hope so. Unfortunately, I think it might be wishful thinking to predicted corruption will fade away. Somehow that kind of corruption always seems to weasel it’s way back into the spotlight one way or the other. Looking at individuals I have to say Bruce Ralston is a popular choice in Surrey. He is trustworthy and cares about his community. What a refreshing novelty that is.

In White Rock Don Pitcairn from Surrey Shirts and the Naked Truth is running for the Green Party. I think he deserves a chance. Although I do not agree with the Green Party’s position on legalizing all drugs and take offense at the use of the word prohibition when discussing crack or crystal meth, federally, Elizabeth May is indeed a beacon of light. As Preston Manning recently said, protecting the environment is being fiscally responsible.

Dave Hayer was the only one from the BC Liberals who I thought might have been a keeper. Unfortunately he's off to join Harpers’ insanity. I’m shocked and saddened by the fact that Dave Hayer is delusional about Gordon Campbell and the HST. That poison kool aid is a powerful thing. Dave Hayer is supporting Peter Fassbender from the Surrey high Jacking. I’m not. That guy sat on a committee overseeing the RCMP contract negotiations when his son was a member of the RCMP. That was a conflict of interest. His hijacking of the Surrey candidacy was toxic just like their quest for a new garbage incinerator. It’s just more air pollution burning toxic waste. 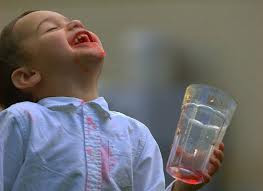 Rich Coleman is an anti Christ. Getting rid of the RCMP department that investigated money laundering in BC Casinos was a criminal act. Saving that money didn’t help them balance their budget. It made his subsequent position overseeing gaming and casinos in BC very conflicted indeed. That guy should be in jail. I guess my point is here today that I do not fear Adrian Dix like the corrupt politicians do. He cares about crime and he cares about the community. I do hope that as the BC Liberals fade away, the BC Conservatives will rise again without the Harper hijacking that plagued the Reform party. It may be wishful thinking but they say hope floats.