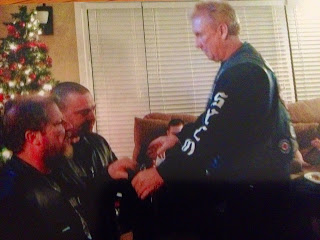 July 2014 the Metro News reported that "According to Saskatoon police Det.-Insp. Jerome Engele, intelligence shows the Outlaws motorcycle club has seven full-patch members in the city." This is a picture of some of them getting their patches Christmas 2013.

I'm all for a free market. I do like a V -twin with a skull better than a feathered helmeted skull with devil horns. One is cool, the other is not. Yet I don't like crack dealers period. My eBook will explain why. The Outlaws are traditionally Hells Angels rivals. Yet one source is claiming that these Outlaws in Saskatoon pay into the Saskatoon MC coalition which is run and controlled by the Saskatoon Hells Angles. 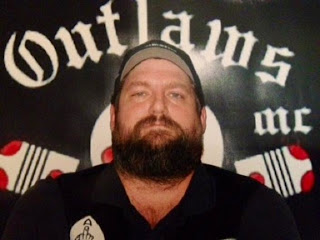 Obviously this recent Hells Angels fraud bust in Saskatchewan is going to hurt their recruitment and public support. I have said that I rather see Outlaws in Surrey than Hells Angels. Yet that local clown claiming to be a prospect for the Outlaws in Surrey calling up the paper and filling them full of BS has got to go. I don't have beef with Doc Riddoch. I just don't support the business they have sanctioned through Larry Amero or what their puppets did to Janice Shore. 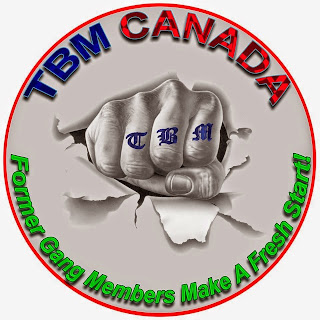