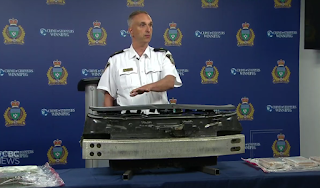 CBC is reporting that "Winnipeg police made an arrest last week in a cross-country drug-smuggling network they'd been chasing since May. But when they looked in the car the 31-year-old Vancouver man was driving in the early hours of June 19, they felt like something was off: there weren't any drugs inside. That's when they pressed the button on the key fob that was supposed to open the trunk of the 2018 Nissan Murano. They heard a whirring sound, and an elaborate secret compartment rose out of the rear bumper, revealing a stash of three kilograms of cocaine (worth an estimated $270,000) and wads of cash totalling $176,000."

"Waddell said investigators discovered the drug network in May, and police believe the group moved several kilograms of cocaine from Vancouver, B.C., through Calgary, Alta., and then to its destination in Winnipeg." They must have lost their police escort when they left BC.

They did seize 10 pounds of cannabis in Surrey because it was in competition with Andy Richard's Cop Pot network. Pot's legal so they seize pot but they let crystal meth go out of Shakerz freely. There's a special place in hell reserved for you all.