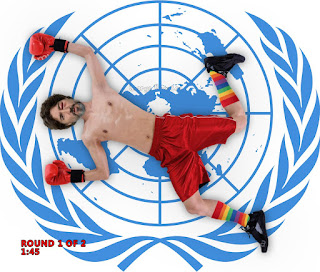 Justan Idiot lost his coveted seat on the UN security council in the first round to Norway and Ireland. Maybe we can get our money back from the WHO scam. We need to stop funding both.

That grey beard can't hide that femmie ass. I personally have a great deal of respect for Norway and Ireland but I cannot accept the UN. It has fallen and is beyond repair. We need to withdraw from it not suck up for special seats. Communist China should not be on the UN's Human Rights Council. China executes political prisoners for Organ harvesting. We can no longer sit at the same table as the UN in good conscience.

The Oath Keepers exposed UN's Agenda 21 while Anonymous exposed the UN's Agenda 2030 of Global domination. Although this is indeed insane, it is not a theory. The UN had posted it's totalitarian quest online and calls it the United Nations New World Order. That is bat sh*t crazy.