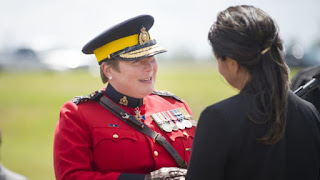 This is ridiculous. No really. The leftist extremists are calling for RCMP Commissioner Brenda Lucki's resignation because she said that although the RCMP does have a problem with isolated incidents of racism like anywhere else, she said systematic racism does not exist within the RCMP. That is a true statement and calling for her resignation is shameful. Racism in Canada does exist but it is not systematic and it is not as bad as Mexico or LA. The ridiculous claim shows why we need to defund the leftist extremists and find independent media outlets.

The taser incident at the airport was a national tragedy but it was not based on racism it was the result of bad training. The arrest of the chief in Alberta who was ragefully swearing at an RCMP officer and challenged him to a fight was a textbook example of reasonable force. It is unfortunate that when the officer tackled him he landed on his face. However, that is a natural consequence of his unacceptable behavior. These leftist extremists are promoting disrespect for the law and abuse of police officers. That is wrong. Everyone deserves to be treated with respect, including police officers who risk their lives to keep people safe.

I have more to say on this matter but will pause there since I have other things to do. This kind of extremism is shameful. It is, as Candace Owen would declare, a narrative with a political agenda. A narrative is a polite way of saying con job.

All people are equal. All people deserve to be treated with respect. All people - black, white, red, yellow, brown and even blue. There are many police officers of diverse ethnicity.

The police deserve to be treated with respect just like anyone else. ANTIFA refuse to do that. They abuse the police just like they abuse the elderly or anyone else who disagrees with them. That needs to stop and we need to stop pandering to these extremists political agenda. We all know where that road leads and it does not lead to civil liberty and mutual respect. Brenda Lucki is a huge step forward for the RCMP. We need to keep moving forward not backward.

Since ANTIFA refuses to obey the law we should hire and train auxiliary police for riot control like the army reserves. No tear gas or peper spray. Just shields and night sticks. Old school tactical containment. Reasonable force defending the rule of law. Maintain the right - Uphold the law. 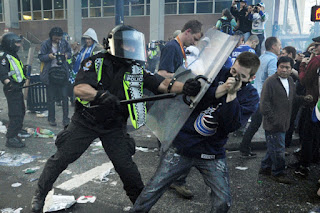