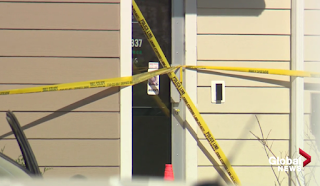 Global is reporting that "One man has died following a shooting shortly after midnight in Edmonton on Saturday, according to police. Officers said they were called to a parking lot of an apartment building on Brintnell Boulevard near 167 Avenue around 12:25 a.m. The man was taken to hospital with life-threatening gunshot wounds and was declared dead upon his arrival, police said. He has been identified by police as Samer Farzat Chehimi. His death is being considered suspicious." Yeah it's usually a suspicious death when they get shot first.