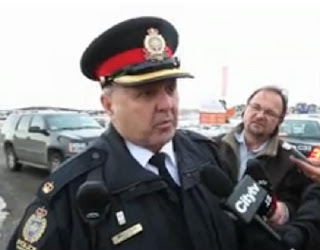 Edmonton City Police are probing a suspicious death after a 21-year-old man was found on the outskirts of the city, suffering from several gunshot wounds and at least one stab wound. Police were called to the location on 170th Street south of Ellerslie Road shortly after noon Tuesday after the man called police from his cell phone, asking for help, but the man wasn't able to give his location.

"He said, 'I've been stabbed.' He didn't know where he was," said Inspector Brian Nowlan. "We could tell he was obviously in distress. He just kept saying he's hurt and needs help." It took police about a half-hour to locate the man, who was found lying on the roadway about 50 feet from his white sedan, which was parked among several outbuildings on an abandoned farm in a remote area along 170th Street.

He was still holding the phone, trying to keep in contact with someone as he fought for his life. The man was taken by STARS to the Royal Alexandra Hospital, where he died. Edmonton Very sad. Police are treating the death as suspicious. If it is deemed a murder, it will be the city's 44th of the year.

Suspicious death? I still don't understand how they can say that with a straight face. Are they trying to cover something up or just look like complete idiots? Last month two men were found dead in a bullet ridden SUV. Police hadn't determined if it was in fact a homicide and treated that death as suspicious. What's suspicious is the EPS using Groucho Marx to write their press releases.