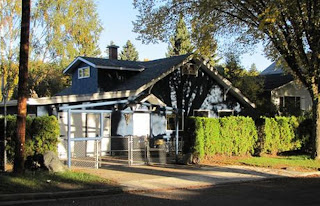 There are a few strange stories in the news of late. This is one of them. Joey Arrance is from East Van and lives in Prince George. He has been described by the police in the papers as a high ranking member of the Game tight Soldiers and a striker for the Renegades. Both are Hells Angel puppet clubs.

Somewhere along the way, Joey fell out of favor with the red and white. They burned down his tattoo shop and the house he was staying in with his girlfriend and his girlfriend's mother. When the house was burned the wheelchair bound mother was killed. Tragic. I was outraged. Another example of absurd gang related violence against one of their own.

At the time someone claimed they did it because Joey raped someone. Knowing how they operate, I thought that was a bold faced lie. Just like how they call people a rat who aren't a rat so people won't ask questions when they kill them. However, we now read that Joey has been acquitted of rape charges in court.

This verifies that a legitimate charge existed. It still doesn't justify murdering his girlfriend's mother. Joey admitted to having sex with the woman on the deck at the clubhouse. He claimed it was consensual and that he stopped when she wanted him to stop. Yet the woman was examined by a doctor and testified an examination of the woman uncovered a large abrasion that would have “required any woman to stop contact in terms of sexual intercourse,” Gray said.

We know that there is another gang rape trial for another alleged sexual assault by Game tight Soldiers at the same Renegades clubhouse in Prince George. There is a publication ban on the name of that victim as well but not against the names of the men charged in gang raping her.

Those individuals haven't been targeted like Joey has. The Hells angels rule about rape is a lie. Mom Bucher was convicted of armed rape. He got his patch shorty after getting out of jail for that rape. There are a lot of things being covered up in Prince George. Let's hope we get some answers and the brutal violence subsides.