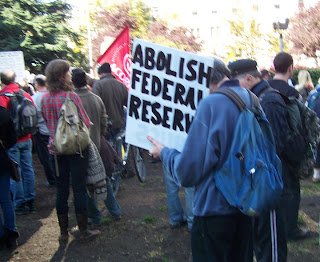 This is a heart wrenching tragedy and it behooves us to look in the mirror and assume some social responsibility. A young woman died Saturday afternoon at the Occupy Vancouver site from what appears to be a drug over dose. Tragic indeed. I can tell you she didn't over dose on pot.

Thursday there was a heroin overdose and if there wasn't medical aid on site, that too could have needed in a fatality. These two tragedies illuminate the real problem in East Vancouver. Gangs get rich off of hard drugs and society enables addiction instead of helping to curb it. Vancouver Coastal Health has been handing out free needles on site part of their “harm-reduction” service. Once again they ignore the other three pillars and assume legal liability for handing out free needles without enforcing the law.

In case they didn't notice, it is a public protest not a safe injection site. The police have every right to arrest people for using hard drugs on that public protest. Tolerating it and handing out free needles is socially irresponsible. Then again it's likely part of the NPA's plan to shut the site down. Create a problem so you can rationalize shutting it down without examining the public urgency of the protest.

Eddy Murphy's new comedy Tower Heist is very timely. It's about a Madoff inspired stock swindler who rips off everyone's pension and gets away with it. A group of people he ripped off plan a robbery to recoup their losses. The fraud on Wall Street is serious. Stephen Harper lied about us not bailing out our Banks. That was a colossal waste of tax dollars. The people have every right to be upset.

It's not about the rich versus the poor. It's about white collar crime stealing tax dollars for bailouts from investment fraud. We need only look to Greece to see how urgent these concerns really are. Don't tell me this protest has no purpose. Don't tell me handing out free needles and free crack pipes is the answer. I disagree.