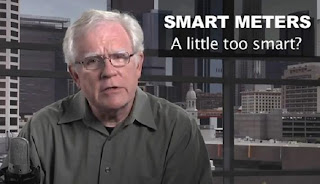 We've talked about how BC Hydro is becoming the new Enron and we've talked about how investment fraud requiring bailouts with tax dollars is a scam, now let's look at the Smart Meter Scam. The new Smart Meter commercials remind me of the HST and the Farmed Salmon adds. They wouldn't spend that much money on the adds if it wasn't going to increase the rates. Even Bill Vander Zalm speaks out against them.

The first flaming concern is cost. BC Hydro is billions in debt because Christy Clark's Liberals privatized the power companies that sell power to BC Hydro at inflated rates. Once you privatize a public service, that company is now mandated to make a profit. It comes as no surprise that these independent power companies are over charging BC Hydro for the power we use.

Throwing a billion dollars away by physically removing existing hydro meters that function with new more expensive meters that have a long list of public concerns is not fiscally responsible.

Same thing with the Smart Meters. There's nothing wrong with technical advancement and making digital meters. It's just that it would make a heck of a lot more sense that they started trying them out with new housing being constructed. That wouldn't be such a colossal waste of tax dollars.

The whole point is to rationalize charging us more money for power so the private power suppliers can fulfill their new mandate and make more money. It's not like they're going to freeze the price of power at peak hours and simple give us a reduced rate for off peak consumption. They're going to charge the same for power used at night and charge more for power used during the day. That's the whole point of spending a billion dollars on new meters. To charge consumers more money.

OK let's say a word about health risks. There have been a lot of concerns raised about the health risks of Smart Meters. These need to be considered before they are forced upon a citizen of a democratic nation against their will. It's like that Erin Brockovich movie and the cancer causing effects of power lines. No one wanted to know about those statistics.

Now we're not going to see too many people complain about their cell phone causing them cancer. We have heard of some small communities opposing cell phone towers in their community because they didn't want all that radiation. Although not too many people are going to complain about having wireless cell phones and wireless Internet at Starbucks, but the truth is we are rapidly polluting our airwaves with tons of wireless radiation and that can't be good for you. If someone has a heath concern about a Smart meter forcing them to have one is undemocratic.

Of course we have the other golden goose egg. Australia has had a huge problem with Smart Meters over billing. Gee like that's not a Corporate brainstorm. It's not like the cell phone companies haven't tried that one. Over billing is another valid concern.

Privacy is another concern. These Smart Meters are not just digital meter. It goes far beyond that and becomes a form of surveillance. The power company does not have the right to install a surveillance device on your home. That is as Big Brother as it gets. Since it's wireless, criminals could intercept the information and use it to track when you are home and when you are away to break into your home.

There are a huge list of concerns with the Smart Meters but the bottom line is that they are a scam. Putting them into new construction is one thing but replacing every existing hydro meter in the province is fiscally irresponsible. We need to address the real problem: the independent power companies that are over charging BC Hydro for the power we use. That is the source of the problem. Some smoke and mirrors distraction will not change that. 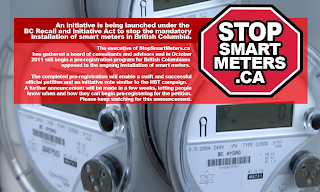