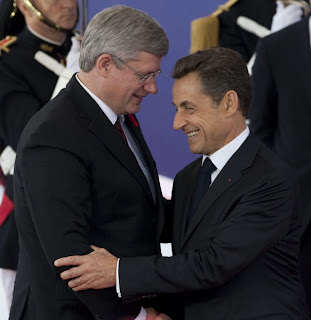 Well, it looks like Stephen Harper has finally drunk the poison kool aid. Stephen Harper is not a Conservative. He's a neo con. I thought Harper explained how bailing out the banks in England was not the government's responsibility. He certainly flipped on that one. Taking Canada from a $2.3 billion surplus to a $64 billion deficit with one swoop of the pen. No wonder he now wants to steal our pensions. So he can pay for the $75 billion he gave to the banks. Opposing a bank tax to pay for that is absurd.

Now he's supporting the Greek Bailout without uttering a word about the needed regulation to prevent that kind of investment fraud from reoccurring. Tragic indeed.

Sarkozy was the dirty dog who did business with Gadhafi for years, accepted campaign contributions from him, then led the bombing against him that resulted in his murder and the murder of his children. Shameful.

Dutch Labour's position is rather bizarre. They're threatening to withdraw their support for the bailout if Greece holds a referendum. Since when is voting on anything a bad thing? Oppose the bailout for not implementing the necessary regulation to prevent that theft from reoccurring. Don't oppose it because they want to hold a referendum.

Canada won't dump any funding into Europe bailout. Oh my goodness was that even on the table? We really need to address the issue of the investment fraud that causes these manufactured crisis's.