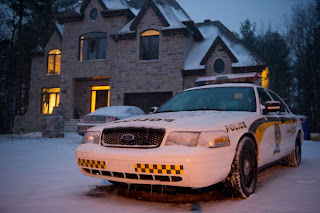 More than two-dozen people were arrested Wednesday during large-scale drug-trafficking raids in Quebec and New Brunswick that authorities say could neutralize an organized crime ring linked to the Hells Angels.

"Our investigation tends to demonstrate that this ring included Hells Angels associates who took over drug trafficking territories after the 2001 Spring Raids and SharQC in 2009," Pelletier said at a news conference Wednesday afternoon, alluding to two major crackdowns last decade that targeted biker gangs.

Investigators allege the three Quebec cells regained control of lucrative drug-trafficking territory in the greater Montreal region in the aftermath of massive police raids in 2009. The fourth cell, based in New Brunswick, is alleged to have travelled regularly to Montreal to pick up drugs for trafficking.

QMI Agency has learned the main target of the Quebec raids was Marc-Andre Lachance, 28, one of two people arrested in October for allegedly threatening a Montreal police investigator. The cop was savagely beaten in the Mexican resort town of Playa Del Carmen last January. Lachance was arrested in his home in Montreal's north end. I wonder if they arrested Leo and the Dweeb.

Sounds like there were some arrests in Ontario as well.