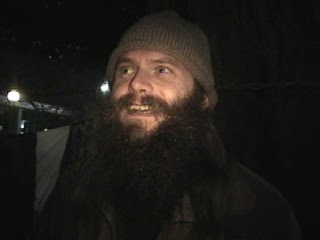 Someone mentioned this guy at the open mike at the Vancouver Occupation and I was surprised I hadn't heard about the story. Seemingly one of the members of the Victoria Occupy has been arrested and has been on a three week hunger strike during his 60 day sentence. Prolific offenders don't even get that much jail time for property theft. He challenged the crown to get a judge to make a ruling on the right to sleep. God love him.

I have mixed feelings about camping in city parks. Homelessness is a genuine concern. Obviously the Occupy Wall Street is a political protest. Many argue that it's becoming a modern Woodstock yet I think the underlining message is important to heed. Corruption on Wall Street is serious. Hiding that with propaganda is self defeating. It raises our taxes and erodes our sovereignty. Pepper spraying protesters, clergy and seniors diminishes all of us. Dorli Rainey is 84 years old. Her photo is a “defining image” of the protest. 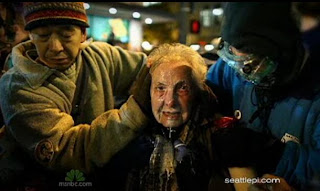