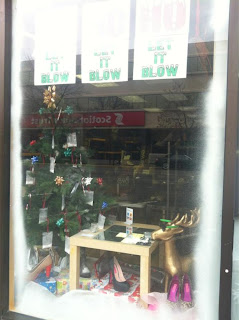 "It's a shoe store, not a drug store." so we're told. But the window display, would suggest differently. Steven Johns Shoes, had a front window display of a gold reindeer beside a table with what looked like a line of cocaine and a rolled up dollar bill sitting on top of it.

The reindeer was beside a Christmas tree donned with "little baggies" filled with a cocaine like substance (Ajax) and measuring utensils. The display went up on Sunday, and store employee Mary-Anne Litzenberger says the phone has been ringing off the hook with complaints. "This was not my motivation, it was the owner's. He wanted to shock (people) and that is exactly what he did."

Steven Johns, set up the display and took off for Mexico leaving Lizenberger to deal with the brunt of his actions. Johns told Lizenberger before he left not to take the display down for any reason, and now she fears she could be reprimanded for her actions. "I told Steven it would kill his business, but he said what business? It has been really slow, so I guess we kicked it up a notch."