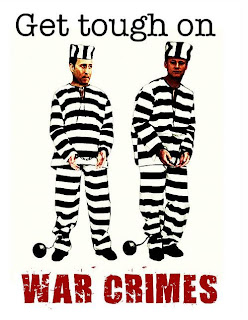 An article on Sympatico asks Is Harper trying to increase Canada's military might? My knee jerk response was after cutting half a billion dollars to Veteran affairs, most certainly not. Yet the article talks about Thursday's celebration of Canadian Forces' contribution to the NATO mission in Libya.

The celebratory event, which was attended by Prime Minister Stephen Harper, Defence Minister Peter MacKay as well as a host of military officials, included a flypast by CF-18 fighter jets, a 21-gun salute and the awarding of a Meritorious Service Cross (Military Division) to Lt.-Gen. Charles Bouchard, the Canadian air force general who commanded the NATO mission in Libya.

What's more, not only did Canada play a significant part in Libya, in the past few weeks the prime minister has also suggested he would commit Canada to any potential Israeli-American action to take out nuclear bomb-making facilities in Iran.

Where to begin. Canada's involvement in the Libya mission was shameful. We went in to enforce a cease fire and we started bombing one side. We said Gaddafi was a dictator yet France and England had been doing business with him for years. Gaddafi even contributed to Sarkozy's political campaign. Unlike Syria or Saudi Arabia where the government was firing on unarmed protesters, the protesters in Libya took up arms and Gaddafi fought back. That mission was about oil just like Iraq.

Harper supported the invasion of Iraq. Which I might add was based on a malicious, premeditated lie about them having weapons of mass destruction. That mission was a moral tragedy and a huge tax payer fraud embezzling millions into private conflicted companies like Haliburton. Supporting the mission in Iraq would simply have been the wrong thing to do, morally and financially. Spending millions of tax dollars on wars for oil, then slashing pensions and public services is just plain wrong.

Now we have the Iran propaganda and Harper is drooling at the opportunity to portray himself as some kind of military force at the risk of being a corporate blackwater coward. Canada wants to be seen as peacekeepers not as bullies. Even those good God fearing Canadians who voted for Harper and want Canada to be strong and free don't want Canada to become militarily corrupt and start selling Iraq chemical weapons to use on Iran.

England got involved in Iran's politics years ago in Operation Ajax and convinced the Americans to assist them in a coo for oil. MI 6 were caught red handed giving false information to the media about Iraq's weapons of mass destruction. We are now supposed to believe a word they say about Iran? After Operation Ajax? I don't think so.

Canada is selling China, India and Pakistan Candu nuclear reactors. Canada is giving those countries the means and technology to use nuclear weapons. "Confronting" Iran, if those allegations do in fact have any truth to them are nothing but hypocritical at best if not suspect. The jets Harper wants to buy are a conflict of interest from a company one of his candidates lobbied for. Spending millions on a huge fleet of jets to commit corporate murder not civilian liberation while cutting millions from soldiers and civilians pensions is wrong, wrong, wrong.

Yes Harper was elected but his actions and his words are very far apart. Getting elected on a tough on crime position then cutting funding for the RCMP is just one of many examples. Wars based on lies is yet another.