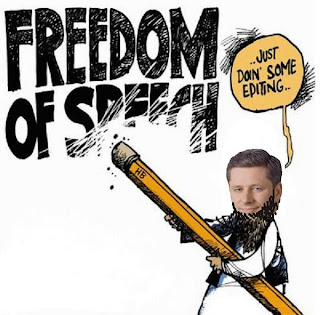 From now on, just about every bit of RCMP information shared with the public will have to be sent to Public Safety Canada for approval. The new protocol will also mean more photo ops for government ministers.

This is absolutely outrageous. Stephen Harper in NOT an Conservative. Firing whistle blowers is bad enough, now he even wants to censor the RCMP. Holy propaganda Batman when will it ever end?

Let's take the BC Rail scandal. The RCMP got a wiretap warrant for an MLA because his cousin was a cocaine dealer. Turns out that they found out about another scandal involving the sale of BC Rail in the process tied to Christy Clark and her brother. Why on earth would the RCMP have to clear anything through the BC Provincial government before it released the news that they were under investigation?

What powers of censorship does this new "protocol" have? If the RCMP had to clear the news of the legislature raids with Gordon Campbell before it happened, that would be a conflict of interest. Would Harper's pal, Gordon Campbell have power to censor that information and instruct the RCMP to withhold some information on the State Secret cop out?

The same thing federally. We know Alfonso Gagliano was named by an FBI informant as a made member of the Mafia in Montreal according to the New York Times. We know that Brian Mulroney was up to his eyeballs in criminal activity. What if a federal political party is being investigated? Would this new protocol mean the party in power has the right to censor the RCMP? That is not Canada. That is not a democracy. That my friend is treason. As the frog boils in warmer water.