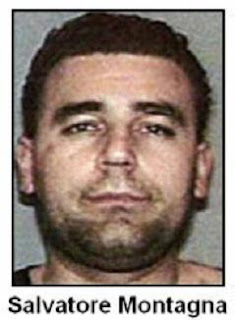 The body of an alleged Mafia boss, who U.S. authorities said once headed New York's notorious Bonanno crime family, has been fished out of a river near Montreal. Salvatore Montagna's body was found in the Assomption River Thursday morning, in Charlemagne, northeast of the city.

Nicknamed Sal The Iron Worker, Montagno owned and operated a successful steel business in the U.S. The FBI once called him the acting boss of the Bonanno crime family – prompting one of New York's tabloids to dub him the "Bambino Boss" because of his rise to power in his mid-30s. His death is the latest in a series of Mafia-related killings and disappearances over the last two years. Montagna was considered a contender to take over the decimated Rizzuto family.

Montagna was born in Montreal but raised in Sicily and, although he moved to the United States at 15, he never obtained U.S. citizenship. The married father of three was deported to Canada from the United States in 2009 because of a conviction for refusing to testify before a grand jury on illegal gambling.

He pleaded guilty to the minor charge, but it made him ineligible to stay in the U.S. Because he is a Canadian citizen, Ottawa couldn't refuse his re-entry into the country, and Montagna crossed the border without any trouble. His arrival in Montreal occurred just months before members of the Rizzuto family began being killed.

Let's not forget, the New York Times quoted an FBI document wherein FBI informant Frank Lino claims he was introduced to Alfonso Gagliano at a mob meeting in Montreal where he was told Gagliano was a politician and a made member of the mafia in Montreal connected to the Bonno and Gambinno crime families in New York.

Let's not forget how the Sixth family at one time worked with the Hells Angels as well. With friends like them, who needs enemies?

One media outlet is reporting that Salvatore Montagna was next in line to take over for the Rizzuto family as was Raynald Desjardins who was shot at September 2011. His bodyguard was charged in that shooting. Kinda like how Peter Scarcella was just a driver for a mob boss named Paul Volpe. "Someone" his boss knew shot him in the back and left him in the trunk of a car. That's when Scarcella took over for his boss.

Peter Scarcella hooked up with Toronto Hells Angel Paris Christoforou in that botched hit on Mike Modica at a Toronto sandwich shop. CBC claims that among the people working for Peter Scarcella is Mike Marrese, who runs the mortgage fraud scams for Scarcella. Rizzuto family timeline.