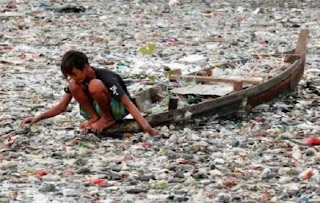 A little bit off topic but not entirely. I just heard a commercial for the David Suzuki foundation on the radio. They're doing some pretty intense fund raising at Where will Santa live dot ca. People still talk about climate change and how the polar ice caps are receding. I can't believe Canada still mines and sells asbestos to India. We really should have more self respect than that.

People complain about the oils sands though there is big money to be made. It's still a scam when you think about who killed the electric car. That is what we should be focusing on. There's a lot of talk about sustainability these days. A concern for the environment which is not only good, it's imperative. A big shout out to Adriane Carr, former leader of the BC Green Party who finally got a seat on Vancouver's City council. Well done.

My personal environmental epiphany came when I went to a earth day presentation at my kid's high school. They showed a Youtube clip about the Great Pacific Garbage Patch. Seemingly plastic takes a really long time to break down and all the plastic that gets dumped in the ocean gets swept away by the swirling currents in the Pacific ocean which dumps it in one spot. As a result huge island of plastic have emerged in what environmentalists refer to as the great pacific garbage dump. I had no idea.

I has cruel effects on wildlife. Birds will eat small pieces of plastic thinking it's a bug. Only the plastic doesn't digest and won't pass through their system. As a result there have been many birds found dead because their stomach was full of undigested plastic and there was not room for real food to get through. The same thing with fish. It's really sad.

Although part of the problem is caused by countries that dump their garbage at sea, 80% of it is litter from land. All the litter on beaches, rivers and from boats contributes to this massive pacific garbage patch. We do need to stop our litter on the beaches and at sea.

Again the word sustainability keeps resurfacing. The old ways of sheer consumption won't cut it any more. Clear cutting the forests is irresponsible. Years ago I remember handing flyers outside the Arts Centre. Some kid starts to heckle me and shouts out how many trees had to get cut down to make you flyer? Without a seconds hesitation I shout back: How many trees had to be cut down the last time you went to the bathroom? The kid froze and had that real puzzled look on his face and turned to his girlfriend. She explained: Toilet paper. Everybody uses toilet paper and that cuts down trees. They didn't know what to say after that.

I can't believe how popular hemp paper was back in the day. We used to have huge farms devoted to growing hemp to make rope and paper. It was totally sustainable. Then the petroleum industry pushed out the hemp farms for making rope and pulp and paper industry pushed out the hemp farms for paper. That was a tragedy. Just like how the oil companies killed the electric car. The free market is all about supply and demand. There's no reason we as consumers can't increase the demand for hemp paper. You don't get high off of hemp but hemp paper will indeed save the rain forests.

Oh and speaking of the oceans, we get most of our oxygen from the ocean surprisingly enough. Only there are these huge dead zones in the ocean where nothing grows like a desert on dry land. These dead zones are growing and we really need to address them. Fish can't survive in them and they are beginning to appear on the West coast. That huge oil spill in the gulf from the uncapped oil well made it much worse. Drift nets that drag along the ocean floor clear cut the ocean just like a forest. We really need to be more aware of the products we buy from drift nets that destroy everything in it's path. That is not sustainable harvesting of the ocean. Consumption based industry leaves nothing for subsequent generations. We need to start thinking about the next generation.