The Friendly Faces of Occupy Vancouver 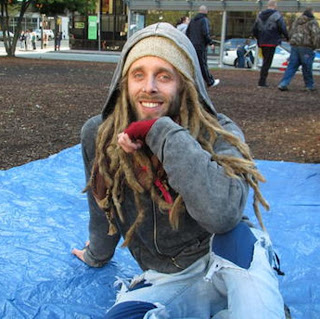 This is a picture of Sean O’Flynn-Magee from the Occupy Vancouver site. He is the one named in the City's court injunction. I can't over stress the nonviolent nature and quest of the Occupy Vancouver movement. During the first week there was a guy silk screening T-shirts for free with his own designed logo. It was an open hand with Vancouver in the background and the caption "You can't shake someone's hand with a closed fist."

They just ran out of the more recent buttons in the information tent that said Vancouver Occupation with a big red heart on it. Day one we saw the peaceful meditation section. Now there's a tent devoted for that. 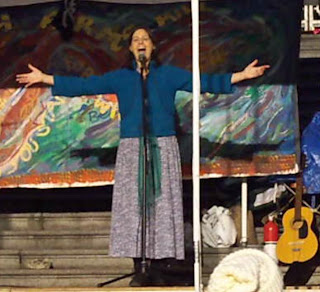 I went to the site yesterday and they had the sacred fire lit again and a wonderful young lady with an amazing voice was singing hymns for the sacred fire. Then she broke out in a chorus of O Canada to which many joined in. Then to my amazement she even sang Amazing Grace. It was wonderful. 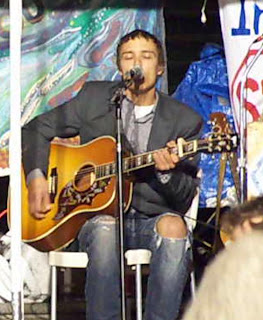 Another talented musician pulled out the guitar and sang some stirring pop songs. Not everyone likes the same kind of music but everyone has their say. This is a political protest but it's much more than that. It's a movement. A movement of awareness, of unity, of listening, of activism and of nonviolence. It's a wonderful thing to see. Go down and check it out. Gandhi would be proud.

With regards to bylaws there are some real concerns and some manufactured concerns. We all know how the City or the Corporate drive like to use technical bylaws to shut down lawful assembly. A few years ago there was a heart wrenching story of a homeless women on a busy Vancouver street who had a candle in her make shift tent to keep warm on a cold winter's night. The candle tipped over and she tragically died in the fire. Very sad. No one wants that to happen on the Occupy Vancouver site. Especially when tents close together could pose a risk for the fast spread of fire if one started. No one wants that to happen.

Banning candles from inside tents is a good idea. Yet the Arts centre was the site of the candlelight vigil for Jack Layton. You can't really say no one is allowed to have a candle in the open. Yet that does make candles in tents harder to enforce. I went down one day with a propane barbecue and a whole bunch of hamburgers and food I bought. The place was crawling with City workers and they said I wasn't allowed to set up the barbecue even in an open area because of the propane flame so I took it all home. The spirit of the law and the letter of the law had become confused.

The key thing here is intent. Is the real intent personal safety or is the real intent shutting down a political protest and lawful assembly? This is a political protest not a safe injection site. The police do have the right to come in and make an arrest if anyone is doing hard drugs on site. A society without laws leads to chaos. No one on site wants anyone to come and steal their personal belongings. Enforcement of law and order is in everyones best interest. Abandoning them with the intent of giving them enough rope to hang themselves is not.

The whole point of the movement is to build a better society. That better society does include police. At first the place was crawling with young bright eyed enthusiastic police officers who were pleasant and polite. After using violence to put out the sacred fire which was safe, self contained in the centre of the open area, things changed. Now that Jim Chu has publicly pledged to shut the political protest down and has threatened physical violence against anyone who doesn't leave on their own accord people's backs are up against the wall. Even in Canada we have the legal right to defend ourselves against violence with equal force. Yet no one on site wants that. They truly are nonviolent pacifists who want to lobby for change.

Instead of focusing all our energy on the negative, trying to find reasons to shut it down, let's take a page of inspiration from the movement and take a look at some of the valid concerns the movement is addressing. Protecting the environment is one and facing corruption on Wall Street is another. We need to remember why Vancouver doesn't have a stock exchange anymore because that is a key focal point of the protest.