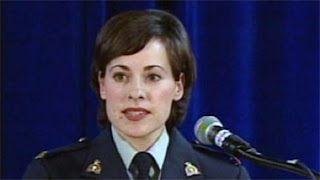 I don't know what to say. I find these new RCMP allegations from a former senior member astounding. Cpl. Catherine Galliford was the face of the B.C. RCMP for years. During her tenure as the RCMP's spokesperson, Galliford announced the arrest of Robert William Pickton and revealed charges had been laid in the Air India bombing.

But in an internal RCMP complaint, Galliford makes serious allegations about misconduct inside the RCMP. Galliford says she faced constant sexual advances from several senior officers from the moment she graduated from the RCMP Academy in 1991.

She outlines years of harassment in a 115-page internal complaint that the RCMP has yet to respond to, including allegations a supervisor on the Missing Women's Task Force lied to colleagues when he said they were intimate and that he even exposed himself to her.

Here's what I'm having trouble processing: She claims she endured years of sexual harassment in the RCMP during the time of the Pickton murder announcement and for years prior to it. We have sex trade workers testify at the Pickton Inquiry that police would blackmail them into having sex with them. We even hear claims that off duty police frequented Piggy's Palace. I don't know what to say. I can see a pattern.

The sexual assault allegations during the Olympics and the claim they tried to smuggle a prostitute on board a police cruse ship in a hockey bag. It's had to process. Galliford says the command and control structure at the RCMP means Mounties are instructed to do as they're told, or risk getting reprimanded. This needs to change.