Christy Clark Implicated in BC Rail? 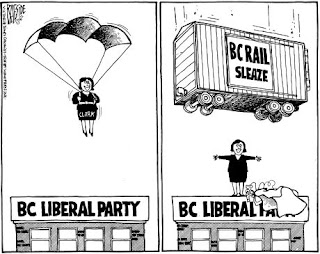 Someone posted a link tying Christy Clark to the BC Rail scandal from Alex Tsakumis's blog. His blog is back up again so I'll just leave the link. Although I think the BC Rail scandal is significant, I do think it's peanuts compared to the allegations of drug trafficking that were the reason for the initial wire tap.

Christy Clark's involvement is not surprising. Her brother was. Don't let that airhead persona fool you. She does have the cruel heart of the NPA. The image lingers of her smiling and giggling as she writes Mayor Gregor Robertson denying his request for funding for more police during the Stanley cup riot and assuring him that they did listen to his request and take it into consideration before they made the decision to say no. There's nothing worse than a heartless airhead.

As for allegations of the RCMP being complacent in dropping the charges and helping the cover up, why would they do that? They were the ones that laid the charges in the first place. As a trade off to renew their contract and stay in BC? That would be dirty.

BC Mary reminds us how the current Sexual Harassment case at the RCMP is going on virtually unnoticed by the AG. "Attorney General Shirley Bond is completely unruffled by the news. Negotiations with the RCMP for a 20 year contract with B.C. will go on as if nothing has happened, she has – in effect – said. Ms. Bond, I suggest, is aware that the RCMP has so much on the Gordon Campbell Liberal Cabinet and its successors that she dare not suggest there will be any hitch in completing the new contract. I suggest the BC Rail Scandal is governing the conditions under which the cabinet of British Columbia can negotiate with the RCMP."